Gold edged down today due to dollar strength and profit taking as speculators and some investors booked profits on 16% price gains from this year’s low.

Gold continues to see smart money diversification as central banks from the ECB and the Fed to the BOJ have all announced ‘stimulus’ or money debasement measures which has led investors to seek gold as an inflation hedge.

All eyes will be on China as perhaps the next to announce action after today’s data showed further contraction in its manufacturing sector for the 11th consecutive month.

The UK will then follow and then other central banks may announce their own measures as competitive currency devaluations or currency wars intensify in the coming months.

We have seen consecutive weeks of bullish strength in the gold and silver markets. Gold has completed what is known as a ‘Golden Cross’ and silver is poised to complete one in the coming days.

These are important indicators of longer term technical strength and in conjunction with the recent positive technical picture are bullish.

The 18 months of sideways-to-lower price action has “built a base”, a very large foundational base, in markets that are in the middle of two of the longest and strongest bull markets in history.

It is another indication that both markets are capable of moving higher in the coming months.

John Bollinger the president of BollingerBands.com said in January that “the golden cross is a great tool in a big, roaring bull market, like the bull market from 1982 to 1998, when it tells you when you’re supposed to be in the market and tells you periods in which the risk is somewhat higher of corrections and such,” he said.

The last time there was a 'Golden Cross' for gold was in early February 2009 (see chart) and gold subsequently rose 103% in the next two years.

Similar gains are quite possible today given the strong fundamentals. Were gold to replicate those gains, it could see gold rise to double today's value of $1,756/oz or to over $3,500/oz.

It subsequently surged 257% to over $49/oz in April 2011 for a 257% increase in just 2 years and 2 months. Given silver’s very strong fundamentals similar gains may be seen in the coming months.

As ever physical bullion should not be bought in expectation of capital gains. They have the potential to reward with massive capital gains but they should be bought for diversification and financial insurance reasons.

NEWSWIRE
(Bloomberg) -- Swiss Monthly Imports, Exports of Platinum-Group Metals
The following is a table of monthly Swiss imports and exports of platinum, palladium and rhodium. The figures include raw form or powder and half-processed material, and were sent in an e-mail by the Swiss Federal Customs Administration. Amounts are in kilograms. One kilogram equals 2.2 pounds.

Cash gold of 99.99 percent purity slid as much as 0.5 percent to 359.32 yuan a gram on the Shanghai Gold Exchange, and last traded at 360.25 yuan. Volumes for the benchmark contract on the country’s largest cash bullion market were 3,309 kilograms yesterday, from 4,449 kilograms on Sept. 18.

(Bloomberg) -- CICC Raises Gold, Silver Prices Forecast After QE3
Gold prices may rise to $1,850 and $1,950 an ounce at the end of 2012 and at the end of 2013, respectively, as the U.S.’s quantitative easing materializes and as lower real interest rates, weaker

US dollar and stronger investment demand will lift the precious metal’s prices, the China International Capital Corp. Said in an e-mailed report today.

Silver will outperform gold thanks to its higher price resilience, the report said, without giving details.

(Bloomberg) -- Gold ETP Holdings Jump for 11th Straight Day to Record
Gold holdings in exchange-traded products backed by the metal rose to a record for the 11th straight session.

(Bloomberg) -- Credit Suisse Client Survey Sees Gold Above $2,000 in a Year
Gold will be above $2,000 an ounce in one year, according to 33 percent of about 160 clients surveyed by Credit Suisse Group AG.

NOTE: Mimosa Platinum is a joint venture between Impala Platinum and Aquarius; Unki Platinum is owned by Anglo American Platinum 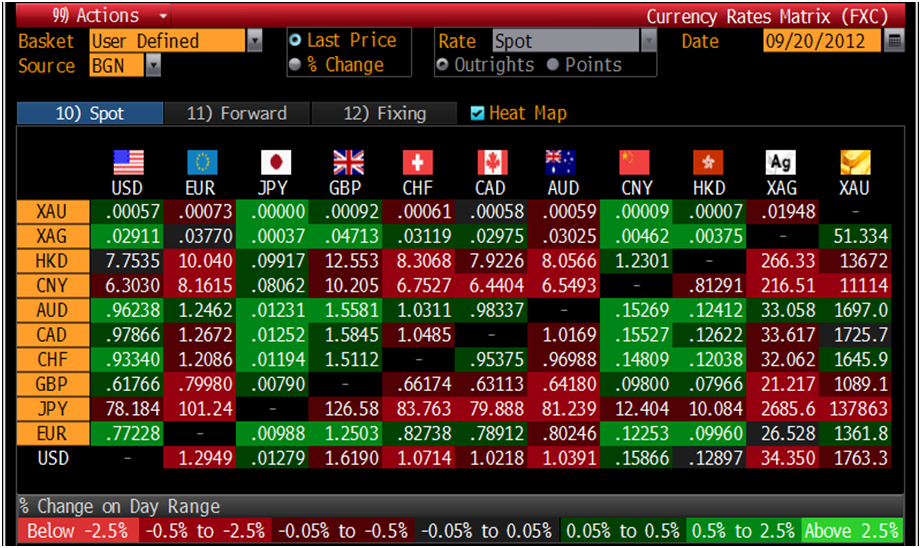 The Trouble with Printing Money - GoldSeek