Most recently Guggenheim Partners showed in their “Faustian Bargain of Central Banks”, also appeared in the FT, that the Fed could lose 200 billion US$, when inflation comes back again. Interest rates would increase by 100 basis points and the US central bank would be bankrupt according to US-GAAP.

We explain in this post the differences between money printing as for the Swiss National Bank (SNB), the ECB and  the Fed. We show the risks the central banks run when they increase money supply, when they “print”.

This link to the SNB website gives insights how many francs the Swiss National Bank requested commercial banks to deposit during the last week. It is just a technical accounting process: Minus (or liability) for the SNB, Plus (or assets) for the banks. Therefore it is often called “printing” like adding a zero to a currency exchange rate. The SNB uses this “printed” money to buy more and more currency reserves and to enforce the peg. At the same time printing increases the banks’  reserves at the central bank. It allows banks to give more loans to consumers and home builders via the money multiplier.

The Limits of Money Printing

The following graph from the SNB former president Hildebrand (2004) shows that a period of inflation had regularly followed the SNB monetary expansion with a delay of about 2-3 years.

Theoretically banks could tell the SNB not to credit their accounts any more, this would prevent the SNB from further printing. Still banks are sure to get the money back one day and they want to be more profitable issuing more loans. Therefore the SNB had ideas for an anti-cyclical capital buffer in order to stop excessive mortgage loans practices and preserve banks’ capital for a possible downturn. Many people fear the a similar bust of the Swiss real estate bubble like in the 1990s.

The SNB thinks to be able to get rid of their excessive currency reserves one day and/or to sterilize deposits (i.e. remove sight deposits from the banks and to convert them into SNB bills). The deputy member of the SNB board Dewet Moser proudly presented in this SNB paper how easy it was to sterilize between May 2010 and July 2011 (see also in the reserves overview above). However he does not speak about the fact that the Swissie strongly appreciated (from EUR/CHF 1.40 to 1.10) during that period and the SNB had to accept huge losses.

Inside the euro system, the most important way of money printing is debiting the account of the ECB and crediting the accounts of the National Central Banks (NCBs)  according to their participation in the Euro system.  This is along the following schema: 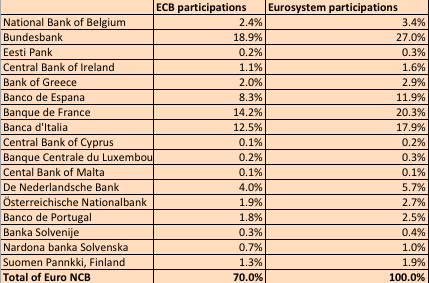 30% of the ECB capital belongs to non-euro states like the UK, Sweden, Denmark, Poland or other non-euro EU member states. These 30% are removed in order to obtain the participations in the euro system.

Printing money means that the ECB increases its debt towards the NCBs in the ratio of the euro system participations, namely Bundesbank 27%, Banque de France 20%, Banca d’Italia 20% and Banco de Espana 12%.

If the ECB buys peripheral bonds with this “printed” money, it implies an implicit transfer from the Bundesbank and the Banque de France and other Northern states towards the periphery, i.e. state financing via the printing press.  By nature of the bad ECB assets this is also called “qualitative easing”.

The Bundesbank losses could be partially realized, when one day a country leaves the eurozone (either Germany or some peripheral countries). What does “partially” mean:
We saw already similar discussions in March, when it had to be decided, if private or public entities take the losses in Greek government bonds. One day, maybe in a couple of years, the ECB or the Bundesbank, the public entities, will also need to take losses, a haircut.

The Bundesbank refinances the credit to the ECB, via an increase of its debt at German commercial banks. These again will possess more reserves. Based on those they may give more loans to German firms and housing. This operation will increase inflation over the medium and long-term.

The following graphs gives an overview of the of German banks’ deposits at the Bundesbank, i.e. the Bundesbank debt with German commercial banks. 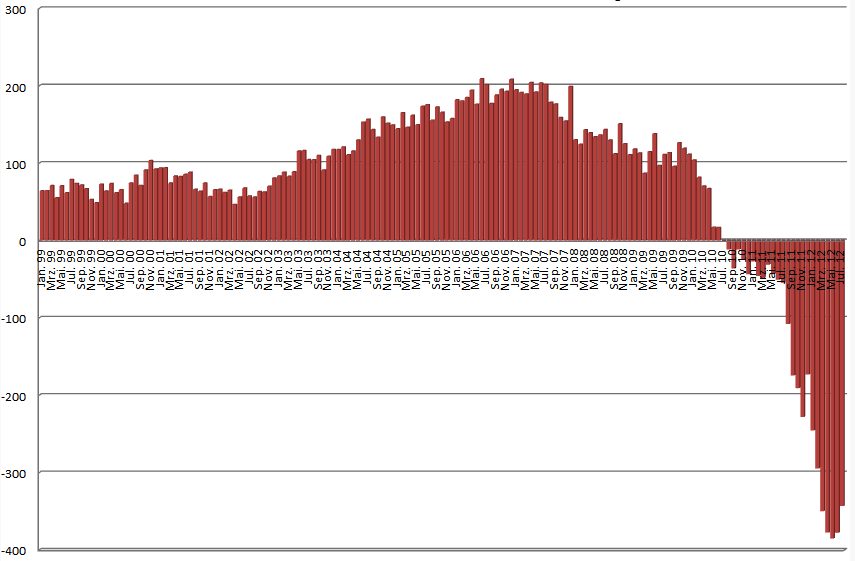 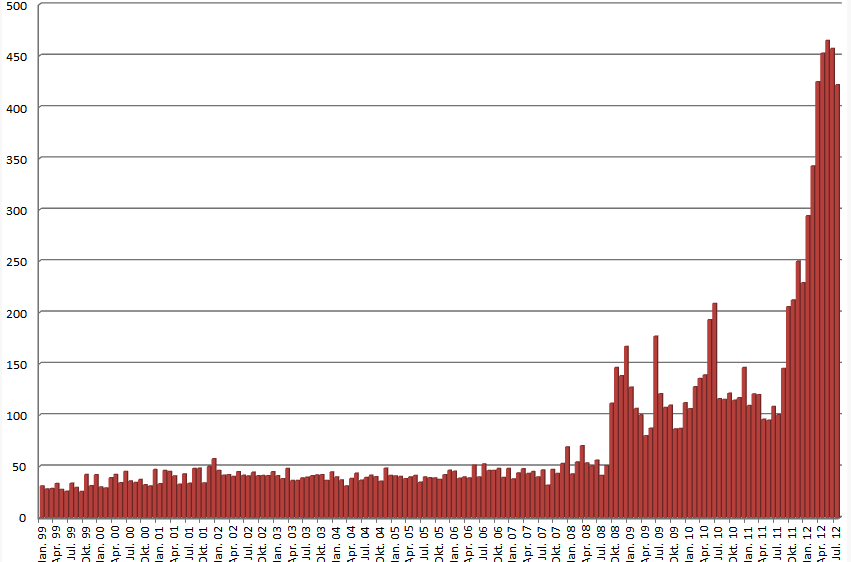 On one side the Bundesbank has more and more liabilities with German banks. On the other side this graph shows how much foreign Bundesbank foreign assets have risen over the years: 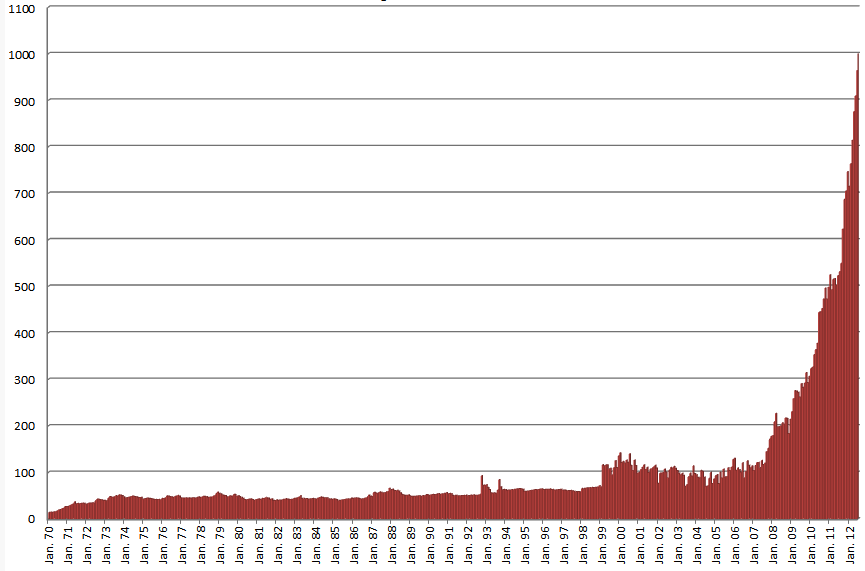 A future haircut of 30% on peripheral positions (of currently about 700 billion €), would cost German taxpayers, 210 billion €, 5% of German GDP, more than the Bundesbank equity. This haircut would require German tax-payers to bailout the German Bundesbank. See more why Weidmann has finally realized this problem together with inflationary risks and his critics with the ECB.

Most recently Guggenheim Partners showed in their “Faustian Bargain”, also appeared in the FT, that the Fed would loose 200 billion US$, when inflation comes back again. Interest rates could increase by 100 basis points and the US central bank would be bankrupt according to US-GAAP.  For them the Fed’s Faustian Bargain with the Mephisto “inflation”. For us the SNB money printing is a even lot more risky than the Fed’s Quantitative Easing. The graph shows where the Swiss problem lies: 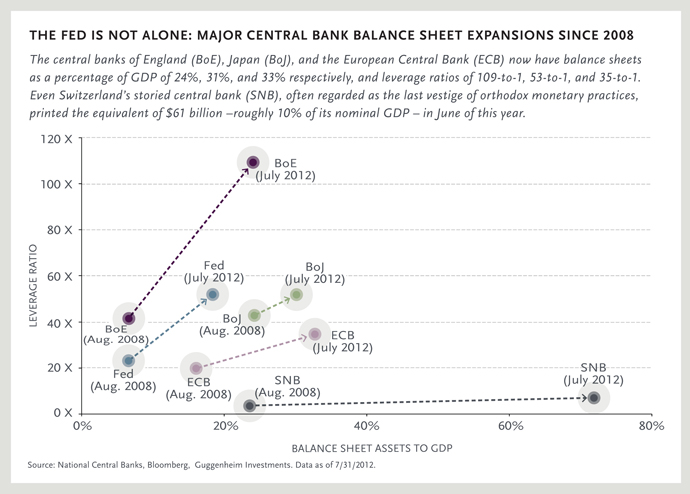 The SNB’s ratio of printed money to GDP is a lot higher than the one of the Fed. In case of inflation the Fed’s losses of 200 billion USD amount “only” to 1.2% percent of the US GDP. It would imply, as Guggenheim Partners state, a bankruptcy in terms of  US-GAAP. But still the Fed will be refinanced by the generous US tax payers.

The risks for the SNB, however, are eight to ten times higher: based on current FX reserves, it will cost at least 10% of the Swiss GDP,if Swiss inflation picks up and the Euro crisis will be not resolved till then.

As opposed to the ECB, the SNB only buys high-quality assets, mostly German and French government bonds. However for the SNB the assets are in foreign currencies, for the big part they are denominated in euros. FX rates move a lot more quickly than American government bond yields do. This is a risk the Fed does not have, and the Bundesbank neither, as long as the euro zone stays together.

Further Fed quantitative easing drives the demand for gold and the correlated Swiss francs upwards.  Sooner or later this will pump more American money into the Swiss economy and will raise Swiss inflation. At the extreme a Quantitative Easing number XXL will bankrupt the SNB or force the tax-payer to bail out the SNB. This might raise the currently low Swiss public debt to levels similar to Germany or France.

The same applies for ECB printing and purchases of peripheral bonds: This will drive money out of the euro zone and out of Germany into Switzerland. Therefore the SNB can still hope that QE3 and ECB peripheral bond purchases never come. For the SNB these two are the Mephistos: Bernanke and Draghi, the ones who promise easy life based on printed money.