Guest Post: The End Of ECB Rate Cuts Or Draghi Against Weidmann To Be Continued...

Even in the unlikely case of a fiscal union, the conflict “Draghi against Weidmann”, between the ECB and the Bundesbank will continue for years. The ECB mandate and many european inflation figures do not allow for excessive ECB rate cuts or for state financing via the printing press, but Draghi wants to help his struggling home country. 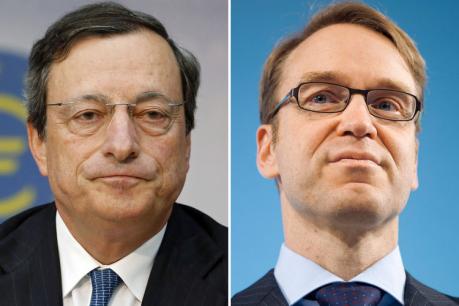 For anybody who had read our posts on the euro crisis in the last months, the recent discussion between Draghi and Weidmann was no surprise.

These were our ideas:

The conflict between the ECB and the Bundesbank has only started

The conflict between the ECB (and the periphery and France) on one hand and the Bundesbank (plus the central banks of the Netherlands, Austria, Finland), on the other, has intensified. Bloomberg’s view recently tried to convince their readers that Weidmann is acting alone and that his opinion contradicts Merkel’s one. The latter is clearly not the case.

Bloomberg even called the Bundesbank to put up or to shut up.

Weidmann decided not to shut up but to put up:

Weidmann: ’Too Close to State Financing Via the Money Press’  (Der Spiegel)

Juergen Stark, the former ECB chief economist, piled on the German resistance in the Handelsblatt on Tuesday, saying the ECB is out of her mandate when she finances states and she would ultimately no longer be able to deliver stable prices.

Draghi answered to the critics:

Like always Bloomberg claims that “Chancellor Angela Merkel … signaled broad support for ECB bond buying. One should remember that Merkel often only talks, but others like Weidmann act.

Austria, Netherlands & Finland have strong Anti-Euro oppositions, Germany not yet

The sentiment against the euro is stronger in the Netherlands, where for the first time left-wing parties oppose the euro and this probably with success. Together with the right-wing Freedom party of Geerd Wilders, anti-euro parties might achieve 35%.

In Austria the business man Frank Stronach initiated a libertarian anti-euro movement. This adds another party to the already existing right-wring anti-euro FPÖ and BZÖ, who count already now about 20-25% of votes.

The ani-euro party True Finns achieved 19% in the 2011 elections. Even if they did not join the government, their opposition puts pressure on the finnish government. The continous Finnish demand for collateral at any bailout makes this obvious.

Given this strong opposition in other countries, it is clear that Weidmann is not alone to oppose the ECB decisions.

Bloomberg should remember that Merkel wants be reelected in autumn 2013:

A strong German anti-euro party does not exist because the conservative Merkel is able to control these anti-euro politicians inside her coalition. On the other side she must do compromises with them.

Dividing the ECB into doves and hawks

However the ECB does not have a dual mandate like the Fed.  The target of the ECB mandate is ONLY price stability, defined as 2% harmonized consumer price inflation (HICP). As opposed to the Fed, there is a one clear quantitative target of (close to) 2%. Therefore it is not a majority that decides, like Bloomberg suggested, but a clear and simple number. If she decides to cut rates even if inflation is over 2% then she must have good reasons that inflation will go down under 2%. Otherwise she violates her mandate, even if “legitimized” by a majority decision.

The following is the current composition of the ECB governing council. There are three groups:

When Draghi cut rates recently, his argument was that HICP inflation would fall under 2%. Looking at the details of the HICPs, we can see that the recent ECB rate cut was close to contradicting the ECB mandate, only the majority of doves might have helped him to sustain this risky decision.

Draghi can be happy that the low German inflation (1.9%) pushed down total inflation in the Euro zone. His home country Italy had 3.6% inflation, a number clearly out of the ECB price stability mandate of 2% ! 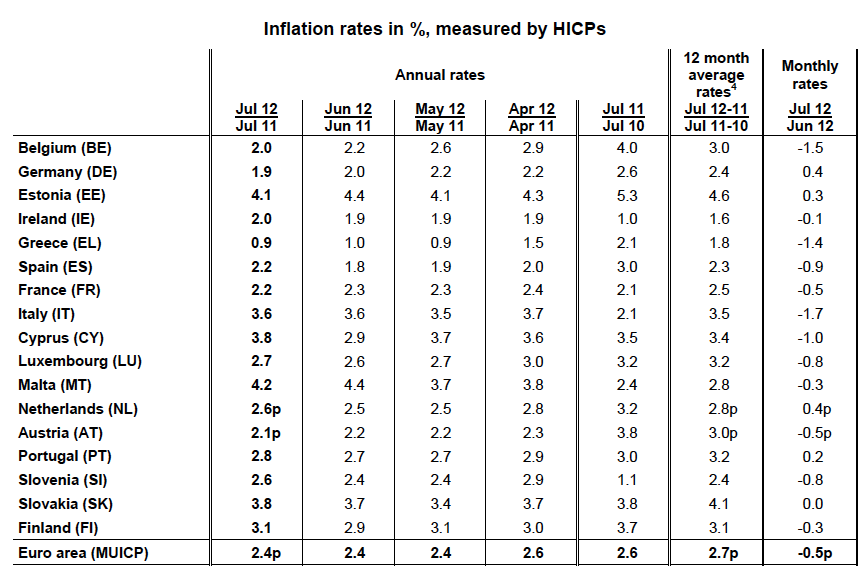 The HICP baskets of many Southern and Eastern European countries have heavy weights in food, energy and other consumption goods, because these countries are poorer than e.g. United States, Germany, Japan or Switzerland. For China this point is even stronger, therefore economists regularly speak of Chinese “food inflation”.

A (slowly) recovering US and demand from developing economies put upwards pressure on oil and food prices. This and higher German and Northern and Eastern European wages might prevent that total HICP inflation moves under the threshold levels of 2%, whereas disinflation will reign in Spain and soon in Italy for a couple of years.

This means that there is no room for further ECB rate cuts. On the contrary, in December 2012, one year after the cheap oil and food prices of end 2011 , deflationary tendencies might wash out on YoY basis, and the ECB will need to hike rates again.

And Bloomberg and Draghi will shut up again.