Submitted by The World Complex

How Government Spending Impoverished Us All

A few weeks ago we discussed the growth of the "virtual" economy. The argument was that metal consumption (in particular copper and zinc) grew in accordance with global GDP until the mid '70's, after which metal consumption grew markedly more slowly than did global GDP. Our thesis was that global GDP (the "official" economy) has at least partially increased by management of perceptions and addition of a lot of economic "activity" which does not increase wealth.

It has troubled me in the past that I could file lawsuits against present and past associates, who in turn might file suits against me. In the very best scenario all that would happen is a redistribution of existing wealth, yet all the legal fees would be additive to GDP. Yet no wealth would be created (except from the lawyers' perspective) and a great deal would be lost. It has always seemed to me that economic activity of this type forms a component of GDP the magnitude of which is unknown.

A reader questioned whether the reduction in growth of consumption of these metals could be due to their replacement by less expensive alternatives. Although I believe that there may be a slight effect, as seen in relative increases in aluminum and stainless steel--I discount most of this because copper, for many of its applications, is very difficult to replace. It is why the price of Dr. Copper is thought to be such a good leading indicator for the economy.

Today we add nickel and steel to our graph, but instead of plotting them against GDP, we plot the ratio of their consumption to global GDP (all scaled to 1 at far left, in 1949). 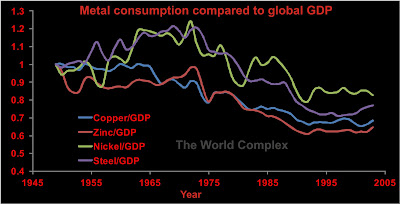 We see clearly that the consumption of metals has not kept pace with GDP, with most of the relative decline happening after 1975.

At the World Complex, I view metal consumption as being a better indicator of economic activity than the officially reported GDP. Perhaps I should say I trust the metal consumption numbers more, as I suspect they are harder to fake. In any case, metal consumption usually involves making something, which is frequently accretive to wealth (except in the case of bombs, et al.).

The decline in metal consumption is a direct measure of the decline of real wealth. Yes, real wealth is not dollars, it is oil; it is copper; it steel. As long as the per capita availability of these resources is increasing, our wealth is increasing. I have argued in the past that the suppression management of commodity prices is largely responsible for comparatively recent declines in their per capita availability.

Has the definition of GDP changed over the last fifty years? According to wiki, it is defined as follows:

where C is private consumption, I is gross investment, G is government spending, X is exports, and M is imports. There hasn't been any change in the definition over the past sixty years. But here is something that has changed.

US Federal spending compared to GDP. The magnitude of spending really takes off after about 1970.

Now this is true for the US, but probably mirrored to some extent in other countries as well.

The problem is not a change in the way the GDP is defined--the problem is in the definition of GDP itself. If we want GDP to be a measure of wealth then we need to remove that G term--or part of it.

A tonne of copper can't be consumed until it is produced. But the government can spend money that it doesn't have. So government spending can't be part of what was produced by a country unless it has been covered by taxation--then at least the wealth was produced prior to consumption. If the spending is empowered by debt creation, then no production was involved.

It's like measuring the wealth of a family by counting the money they spend, with no regard as to whether they are piling up credit card debt.

The miscalculation of GDP is useful to TPTB because it creates an illusion that we are wealthier than we really are. Ph.D. economists can't perceive this truth if they want to keep their funding.

Perhaps in addition to occupying Wall Street, protesters should give some thought to occupying the White House, Congress, and the Senate.