Friday morning the Schuykill Expressway was jammed again due to an overturned car at Belmont Avenue. My first thought was how anyone could turn their car over at the usual 25 mph speeds on the Schuykill Expressway. My second thought was that I was damned to having to take the route from 69th Street in Upper Darby down Chestnut Street (aka The 30 Blocks of Squalor) to work. I was still steamed by Obama’s $450 billion “JOBS” plan. His new plan was touted as an infrastructure plan when it is nothing but a “screw future generations” plan. Do these politicians have no shame?

Obama and his minions will tell you that Social Security is a fantastic program. It should not be touched. They declare that it is self funding. That is a bold faced lie. The Social Security Trust Fund has a $17.5 trillion unfunded liability. This is why:

Those who retired in decades past saw much bigger returns for their payroll tax investment. But clearly this situation is not sustainable. It’s like putting all your expenses on a credit card knowing full well you don’t have the means to pay it back.” – Bankrate.com

We have 10,000 people every day turning 65 years old for the next 19 years. These people will be taking $70,000 to $150,000, on average, more out of the Social Security Trust Fund than they put in. This worked just fine when there were 16 workers contributing for every 1 retiree in 1950. It doesn’t work so well when there is only 3 workers for every 1 retiree, as there is today.

The party that presents Social Security as a well run outstanding example of government at its finest has decided the best way to create jobs is to double down on you paying even less in payroll taxes than you did this year. We know for a fact the average person will get between 25% and 125% more than they paid into Social Security. The Obama plan last year and again this year is to drastically reduce the amount paid into the Trust fund, so you can have the privilege of consuming the same amount of food and energy at a much higher price. Brilliant plan! It is amazing how liberals and Keynesians can have such disregard and scorn for future generations who will be handed this bill with no means to pay.

The Obama plan consists of $225 billion to screw future generations so we can spend today. It also includes $62 billion to pay people who aren’t employed for 99 more weeks, even though Federal Reserve studies have proven that extending unemployment keeps the unemployment rate 1% higher. Paying people for almost two years while they are not employed is somehow supposed to “create” jobs. Then we have the traditional $70 billion transfer from our Chinese lenders to Timmy Geithner and then into the pockets of state government union workers across the land. Obama needs those votes in 2012. Why should states be required to adapt their budgets to reality when their sugar daddy can keep supplying the candy?

The last chunk of change in the Obama stimulus plan will be $100 billion for some more shovel ready infrastructure jobs. This line was used to snow the American public back in January 2009 when Obama’s $800 billion porkulus bill was rammed through with no Republican votes in the House and only two RINO votes in the Senate. I’m sure you’ve benefitted greatly from the first round of shovel ready jobs. I know the $300,000 funneled to my township to double the size of a parking lot at our local park, which will be utilized on possibly 3 days per year, created a huge boom as the multiplier effect promised by Keynesians revitalized our local economy. 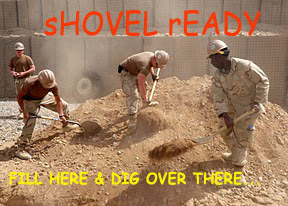 As I drove down Chestnut Street through West Philadelphia on Friday I observed the result of Obama’s previous infrastructure stimulus plan. Prior to Obama’s 2009 stimulus, Chestnut Street between 69th and 39th (30 Blocks of Squalor) was pocked  with potholes and the sidewalks were crumbling, uneven and littered with trash. This entire stretch of highway was repaved with a thin layer of blacktop in the spring of 2010. Wheel chair ramps were built on every corner of these thirty blocks. Another example of government at its finest, as the Americans with Disabilities Act was only passed twenty years prior. The insanity of installing wheel chair ramps on every corner without repairing the lopsided, crumbling, trash strewn sidewalks leading to the wheel chair ramps is lost on the government drones.

A little over one year since this fine example of Obama infrastructure spending I was able to make some revealing observations that can be applied to our country in general. I counted the number of holes that had been dug in the newly paved street as I slowly proceeded down this 30 Blocks of Squalor. I was able to do this because the City of Philadelphia government drones are incapable of properly timing the green lights to allow for a smooth flow of traffic.

In the space of 30 blocks there were 20 holes that had been dug and refilled. It seems you can make a highway appear shiny and new by putting a thin veneer of blacktop on the surface but below the street you still have rotting water pipes and decaying sewer systems. This symbolizes the thin veneer of big government solutions for America’s deeply rooted fiscal problems. Short-term Keynesian ephemeral stimulus injections are chosen over long term structural fixes. The result is the true infrastructure of this country continues to deteriorate, spring leaks and rupture at the most inopportune times.

The politicians will continue to try and give the appearance of fixing the structural problems in this country, while putting nothing but useless patches on broken systems and using hype and misinformation to sell their glossy veneer of deception as solutions. Obama has chosen to screw future generations in order to try and get re-elected in 2012. What a great American visionary leader he has proven to be.