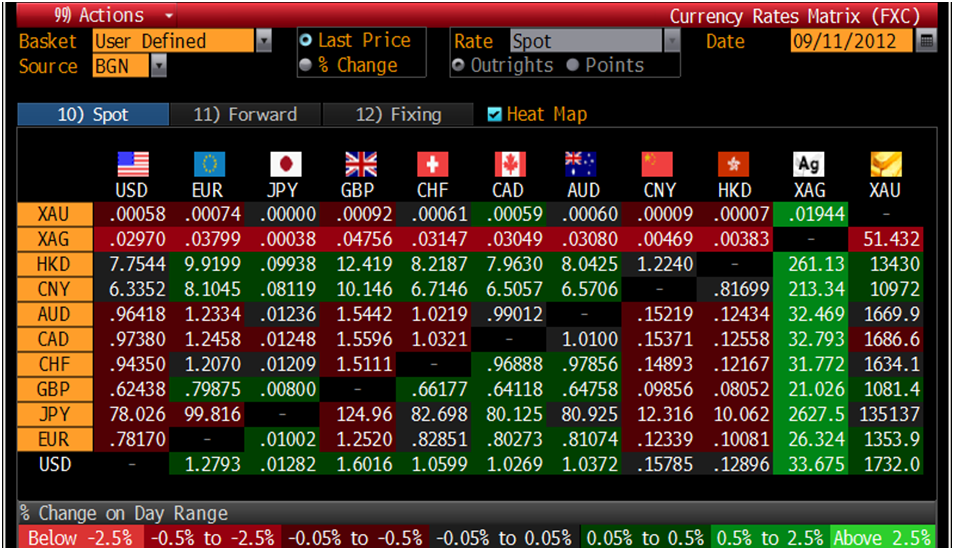 Gold inched higher on Tuesday as investors await the German ruling on the eurozone’s bailout fund and a possible US Fed decision on QE3. There are expectations of a pullback by market participants, including clients, but what tends to happen after break outs like this is that gold continues to surprise to the upside and buyers only buy with conviction after gold is at record highs in dollar terms and again making some headlines.

0800 GMT tomorrow is the German constitutional court decision as to whether Germany can contribute to the European Financial Stability Mechanism.

The court has already rejected a last bid by Peter Gauweiler to delay the case (because of Draghi’s pledge of unlimited funds to buy government bonds) and its decision tomorrow is crucial to the future of the euro and the eurozone.

If Germany does not ratify the ESM treaty, the ESM and other bailout measures may be thrown into chaos leading to considerable market volatility tomorrow. A no vote would likely see a considerable increase in risk aversion.

Last week, Mario Draghi announced the ECB was ready to buy unlimited quantities of short-term government bonds of nations signed up to rescues from the ESM or the temporary European Financial Stability Facility it is designed to replace.

Gold has gained almost 7% in the past month on news of the ECB bond buying plans and hints from the US Fed minutes released saying that action would be taken to stimulate the US economy if necessary.

Gold is increasingly attractive as a safe haven for investors as a hedge against inflation due to rampant money printing by central banks.

Diversification into gold continues with gold holdings in exchange-traded products backed by gold rose to a record for the fifth straight session. The amount increased 6.3 metric tons, or 0.3 percent, to 2,480.43 tons.

Credit Suisse and Unicredit have joined JP Morgan, Goldman, UBS, Bank of America and other banks in revising upwards their gold forecasts.

Gold will advance to $1,775 an ounce in three months and $1,850 in 12 months, Credit Suisse Group said in a report which was picked up by Bloomberg.

UBS increased its near term precious metals prices on “strong” likelihood of QE3, given the poor payrolls report. UBS raised the 1 and 3 month gold price estimate to $1850/oz from $1700. Silver to $37/oz from $32/oz and $35/oz respectively previously

Central bank demand internationally continues and demand for gold in the increasingly volatile Middle East remains robust as seen in data from the Istanbul Gold Exchange.

It showed that Turkey’s gold imports were 11.3 metric tons last month alone. Silver imports were 6.7 tons, the data show. Much of these imports may be destined for Iran where imports have surged an astonishing 2,700% in just one year – from $21 million to $6.2 billion.

In the first seven months of this year, Turkey's exports to Iran have also skyrocketed to $8 billion, up from $2 billion in the same period last year. And it is widely believed that the major portion of the increase, which is $6 billion, stems from the export of gold.

There is speculation that the Iranian central bank is buying gold and that they may be accepting gold in payment for oil and gas in order to bypass western sanctions.

Turkey is paying for the oil and natural gas it is importing from Iran in gold, Turkish opposition deputies have claimed, drawing attention to the enormous increase in Turkey's gold exports to Iran in 2012.

“Gold is being used as an instrument for payment. Under the guise of exportation, gold is being sent to Iran in exchange for oil,” Sinan Aygün, a deputy from the Republican People's Party (CHP), has told Turkish daily Today's Zaman.

Iranian people, encouraged by the state are also buying large quantities of gold and saving in gold in order to protect against inflation and the devaluation of the Iranian real.

Turkey's total gold and precious stone exports have amounted in the first seven months of 2012 to nearly $8.9 billion, while the figure was only $1.8 billion in the same period last year.  Some $3.2 billion of Turkey’s $4.4 billion of gold sales to Iran in the first half of the year were in bullion form.

Iranians purchased $4.8 billion worth of gold in 2012's second quarter, up from roughly $1 billion in the first quarter of the year.

Iran appears to be circumventing western sanctions in this way.

The US is said to be uneasy about Iran's skyrocketing purchases of Turkey's gold and has been following the sales closely.

There are rumours that Iranians purchase Turkish gold via third parties in order not to be noticed and that they entrust the purchased gold to the Central Bank of Iran (CBI), again via third parties.

The Central Bank of Iran supports the purchases to order to create an “economy of resistance” in the face of increasing sanctions from Western countries.

Iranians have turned to gold as a method of saving in the face of tightening Western sanctions.

People, companies and banks in Iran are buying gold as a safe haven against months of sanctions induced currency devaluation.

This trend looks set to continue and may even intensify if Israel attacks Iran in the coming months.

ECB's willingness to act...is plainly not enough in itself to save the euro – The Telegraph