JPMorgan Uses Surge In Its Default Risk As A $1.9 Billion "Source" Of Revenue And Net Income

A quick look at the JPM earnings this morning would indicate all is well and that the company beat on the top and the bottom line: after all the company generated $23.76 billion in revenue on expectations of $23.26 and EPS of $1.02 relative to an expectation of $0.92. So far so good. The only problem is that unlike in previous quarter, when the primary driver of the bottom line was releasing reserves, this quarter, when everything blew out and blew up, that would have been seen as massively disingenuous, even by such permaclown as Dick Bove (which nonetheless did not stop the bank regardless, and JPM did take a $170 million reserve release, granted less than the $1.2 billion in Q2). So what does JPM do? Why it pulls the "Fair Value Option" card, discussed recently in the context of Morgan Stanley when we speculated whether the bank's biggest asset was their debt. Turns out we had the concept right, but the bank wrong, because $0.29 of EPS Net Income, or $1.9 billion pretax, was a "benefit from debit valuation adjustment (“DVA”) gains in the Investment Bank, resulting from widening of the Firm’s credit spreads." That's right: the fact that JPM spreads blew out in the quarter, and its default risk soared, for one reason or another actually served to "generate" not only net income but also revenue!  And now you see why American banks can never lose - in a good quarter, they release reserves; in a bad quarter they take FVO benefits in the form of Debit Valuation Adjustments, or in this case both! Winner, winner, always a chicken dinner for Jamie Dimon. Expect every other bank to do the same accounting BS this quarter to pad their numbers.

And then the DV(D)A in action:

So what happens when one excludes the ridiculous benefit from the DVA? From the earnings presentation:

Said otherwise, JPM's Investment Banking earnings were negative on a rational human being basis, when the bank's overall credit deterioration is not used as a source of Earnings. This means the firm missed not only its EPS but its top line by about $1.9 billion!

And that explains why the stock is down.

For those stunned by this accounting sleight of hand, read our primer on FVO from April 2009:

Financial company stock prices have been on a tear these days, undoubtedly based on glowing, solid results. After all didn't Wells just have a blow out quarter? What is that you say, $5 billion in "earnings" were based on FAS 157-4 reversal and accounting gimmicks? Why should that matter to investors who are happy to buy N/M forward PE stocks any time Cramer top ticks the market, or the Power Lunch brigade glowers in the self proclaimed next American Golden Age.

Well, the financial ripfest, while benefiting bank prop desks (or at least the one that is left) may end up having some unfortunate side effects for none other than the banks themselves, and especially their accounting voodoo: the basis for the recently announced stellar financial results.

The issue at hand is the "Fair Value Option", which under US GAAP essentially allows the booking of a pre-tax profit when a bank's debt trades lower in the open market. This benefits banks that opt-in for FVO instead of other accounting approaches such as amortized cost, or historic cost.

And so readers can get a perspective of just how large an accounting "benefit" the FV Option is to financials, observe the table below which compares 2008 bank Net Income with the Pre-Tax Gain from Fair-Valuing of Own Debt. 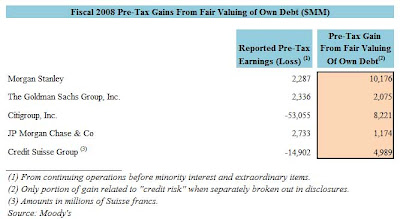 For a somewhat rough proxy of how the five selected banks' debt securities have traded in recent times, please see the chart below. 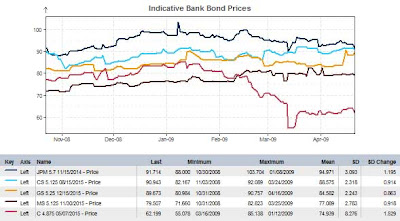 Of the 2015 bonds, recent appreciation has been seen in Goldman Sachs and Credit Suisse bonds, while the remainder have remained relatively flat or have even declined. Of course, these are merely proxies and many more securities are calculated for FVO per GAAP.

Regardless, if the equity run up persists, its is inevitable that bond spreads will tighten (see this post for comparisons for credit and equity levels in financials), thereby eroding the FVO pre-tax accounting benefit for companies with appreciating securities, and in fact will result in a negative pre-tax treatment. How much of a negative contributor to EPS it is will ultimately depend on i) how high equity security prices go and ii) how much of a catch up role comparable credit securities play in their price. It is likely that the respective CFOs are too aware of this phenomenon, and could be one explanation for the divergence between equity values and bond prices. If bonds had experienced the same run up as stock prices, the recently announced EPS for the major banks would have been much more adversely impacted.

As for the firm's outlook:

So much for financials-led "growth"

And the full JPM earnings statement.