Gold is a tad higher today in most major currencies. Investors await the policy decision by the US Federal Reserve and Fed Chairman Ben Bernanke’s news conference at 1815 GMT.

Yesterday’s German Constitutional Court’s decision allowing Germany to ratify the €500 billion ESM with strict conditions sent gold to its highest price since last February (in dollars) and silver back above $34/oz briefly.

It is worth remembering that gold, silver and the platinum group metals (PGMs) have seen strong gains in the last 30 days and therefore a correction is possible.

In the last 30 days (since August 13th), platinum has risen by 18.9%, silver by 18.7%, palladium by 18.4% and gold by 7.6%. All remain well below their nominal record highs (see charts) and more importantly well below their inflation adjusted highs.

All will most likely continue to rally especially if the Fed announces QE3 today as investors turn to precious metals to hedge substantial money printing by governments and the real risk of future inflation.

"The Euro bailout measures and the opening of the monetary policy floodgates by the central banks are likely to result in higher inflation in the medium to long term," says today's Commerzbank commodities note.

The strikes and violence in South Africa's gold and platinum industries are supporting and may contribute to higher prices.

Machete-wielding strikers forced Anglo American Platinum, the world's No.1 platinum producer, to shut down some of its operations in South Africa, sending spot platinum to a five month high of $1,654.49.

Spreading labor unrest in the nation’s mining industry has deepened concern of a credit-rating downgrade for South Africa.  South Africa’s bonds slumped and the cost of insuring the nation’s debt jumped more than any other country yesterday.

The rand weakened 2% against the dollar, extending its loss over the past month to 3.1%, the worst performer among 16 major currencies.

Geopolitical risk continues to support gold with riots and attacks aimed at American interests spreading across the Middle East, North Africa and even into West Africa.

In the aftermath of the storming of the US embassy in Libya and killing of the U.S. ambassador, violence has flared in Egypt, Tunisia and in Yemen this morning and there are concerns of violence in Nigeria.

Hundreds of Yemeni demonstrators stormed the US embassy in Sanaa today and security guards tried to hold them off by firing into the air. Once inside the compound, they brought down the US flag and burned it.

Nigeria boosted security at foreign diplomatic buildings and Nigerian police are on “red alert” and ensuring “24-hour water-tight security in and around all embassies and foreign missions in Nigeria,” spokesman Frank Mba said today in an e- mailed statement from Abuja, the capital. 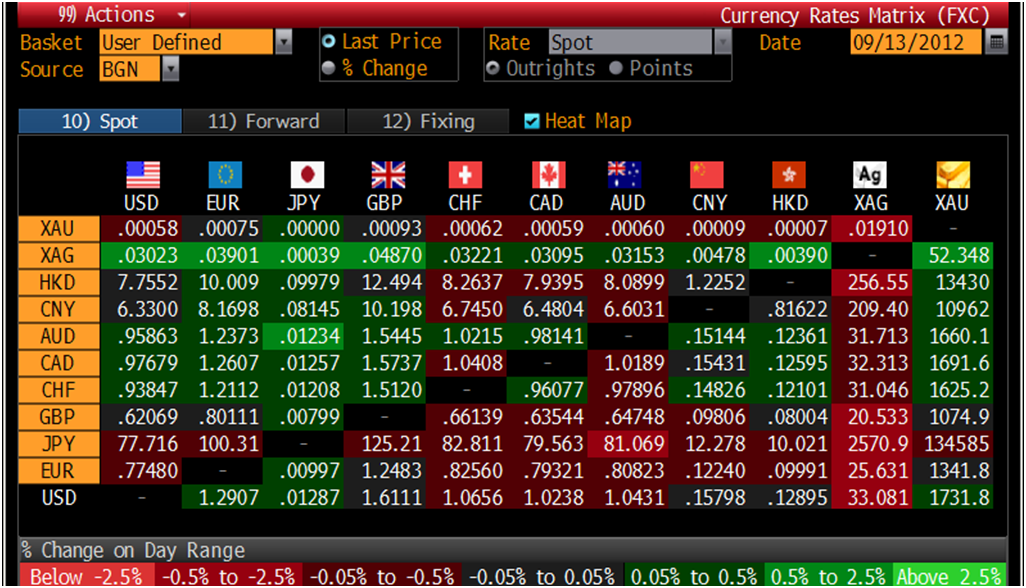 Protesters have attacked the U.S. embassies in Cairo and Tunis. In Tunisia, police used tear gas to stop hundreds of protesters from storming the United States Embassy. US embassies in Tunisia and Algeria warned Americans to avoid crowded places because of expected protests.

In Egypt, the powerful Muslim Brotherhood called for peaceful nationwide protests tomorrow “outside all the main mosques.”  Security guards maintained the Egyptian U.S. embassies' perimeter against protesters, some who hurled Molotov cocktails.

Geopolitical risks remain elevated and means that an allocation to gold remains important.

The Rise of the Barter Economy - Bloomberg