Yesterday afternoon, Barack Obama who is currently in South Korea, briefly was within bullet range (if behind bulletproof glass) of North Korea when he stood on the edge of the DMZ separating the two feuding countries. A few minutes later he left and told the world that "Bad behaviour will not be rewarded" referring to the imminent launch of North Korea's Unha-3 rocket scheduled for a test launch in April. He added that "I will also note that every time North Korea has violated an international resolution, the Security Council resolution, it has resulted in further isolation, tightening of sanctions, stronger enforcement. I suspect that will happen this time as well." Alas, we doubt that Obama's warnings will have much of an impact and that in a few weeks NK will go ahead and hit the launch button undeterred, in the process forcing Japan to scramble its Aegis destroyers and take other countermeasures as discussed last week, in case the missile "veers of course." But just what is the trajectory? Courtesy of North Korea Tech, we now know the secret path the North Korean rocket is expected to take. All we can say is there better not be strong Westerly winds.

North Korea’s Unha-3 rocket, scheduled for launch next month, will drop to earth in two stages off the western coast of South Korea and to the east of Luzon Island in the Philippines, according to documents submitted by the country to the International Maritime Organization.

The documents, obtained by NorthKoreaTech.org, were sent to the IMO’s London headquarters from the DPRK’s embassy in the U.K. They carried the name of “Ko Nung Do,” who is identified as director general of the DPRK’s Maritime Administration.

Some of the information restates what has already been disclosed by the country: that the launch would take place from a satellite launch site in Cholsan County of North Pyongan Province during a five day period from April 12th to 16th.

They also include some new information: that the launch could take place anytime between 7am and noon local time (2200 to 0300 GMT); and include the coordinates of the projected drop zones for the two-stage rocket.

The rocket’s path takes it over the western tip of South Hwanghae province in North Korea then over the South Korean islands of Baegryeong-do, Daecheong-do and Socheong-do, and then across open water until it passes between Japan’s Miyako and Ishigaki islands before heading further south.

The details were provided to the IMO so that the international organization can warn shipping traffic to stay clear from the two areas.

A similar notice is expected to be provided by the International Civil Aviation Organization to aircraft.

North Korea’s last rocket launch in 2009 was from the Tonghae Satellite Launching Ground in the east of the country and had the rocket flying over Japan en route towards the Pacific Ocean.

Many countries have urged North Korea to halt the rocket launch, which is widely seen as a long-range ballistic missile test and not a satellite launch. Japan’s defense minister has publicly said he may order the deployment of Patriot missiles to the Okinawan islands so that the rocket can be shot down should it fail and pose a danger to Japan.

Below you can see copies of the letter and an embedded map illustrating the two zones. 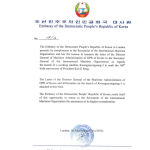 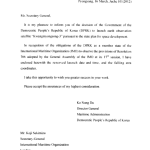 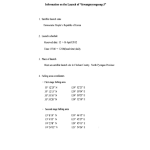 Full rocket trajectory below. Citizens of Philippines be afraid. Be very afraid (source).