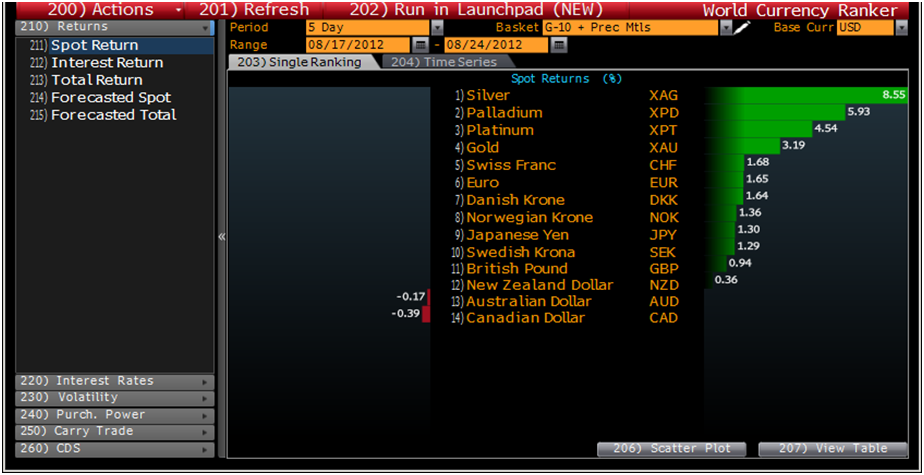 Gold gave back some gains on Friday but it’s still set for its biggest weekly rise in more than 2 months due to the very strong fundamentals.

Today, US durable goods orders are published at 1230 GMT and weakness would confirm weakness in the US economy and should lead to further safe haven demand for gold.

The European Central Banker is fighting to save the European fiscal union and quantitative easing seems certain in Europe.  Investors will wait to see if central bankers are coordinating their efforts and announce further QE at the same time.

Reuters reported increased demand for bullion in Hong Kong with one bullion dealer reporting “purchases by investors in the physical market.”

There are even signs of a pickup in physical demand in India with strong buying being done by stockists ahead of the busy marriage season.

The use of the term “perfect storm” by market participants is a bit clichéd and over used at this stage however it is appropriate with regard to looking at the fundamentals driving the precious metal markets and particularly gold and silver.

All of the recent focus has been on the Fed and the will it or won’t it engage in QE3 saga. Many of us said long ago that some form of QE on a significant scale is inevitable. However, it is important to realise that the Fed is just one factor driving precious metals higher.

The Fed is not the be all and end all and while the Fed can jaw bone and manipulate prices higher and lower in the short and medium term - in the long term the free market and forces of supply and demand will dictate prices.

There is a frequent tendency to over state the importance of the Fed and its policies and ignore the primary fundamentals driving the gold market which are what we have long termed the ‘MSGM’ fundamentals.

As long as the MSGM fundamentals remain sound than there is little risk of gold and silver’s bull markets ending.

What we term MSGM stands for macroeconomic, systemic, geopolitical and monetary risks.

a) Macroeconomic risk is seen in the risk of recessions in major industrial nations with much negative data emanating from the debt laden Eurozone, UK, Japan, China and U.S. in recent days.

It remains difficult to pinpoint the nature of the coming recessions and possibly a Depression and whether it will be deflationary, inflationary, stagflationary or the less likely but possible none the less ‘Black Swan’ of hyperinflation.

Deflation remains the primary concern of most policy makers, politicians, bankers and investors.

However, the risk of deflation is a short term one and the monetary policy response or M means that various forms of inflation remain the medium and long term threat.

b) Systemic risk remains high as little of the problems in the banking and financial system have been properly addressed and there is a real risk of another 'Lehman Brothers' moment and seizing up of the global financial system.

The massive risk from the unregulated “shadow banking system” continues to be underappreciated.

‘Financial weapons of mass destruction’ in the world wide shadow banking system are now estimated at over $60 trillion in late 2011.

Globally, a study of the 11 largest national shadow banking systems found that they totalled to $50 trillion in 2007, fell to $47 trillion in 2008 but by late 2011 had climbed to $51 trillion, just over its estimated size before the crisis.

c) Geopolitical risks are elevated - particularly in the Middle East. This is seen in the serious developments in Syria and between Iran and Israel. There is the real risk of conflict and consequent affect on oil prices and global economy.

There are also simmering tensions between the U.S. and its western allies and Russia and China.

Resource nationalism is being seen throughout the world and some developing nations look set to demand higher prices in terms of debased fiat currencies for their finite natural resources.

d) Monetary risk is high as the policy response of major central banks to the first three risks continues to be to be ultra loose monetary policies, ZIRP, NIRP, the printing and electronic creation of a tsunami of money and the debasement of currencies.

Should the MSG risk increase even further in the coming months than the central banks response will again be by monetary and further currency debasement which risks currency wars deepening.

This risks the devaluation of all fiat currencies and serious inflation in the coming months and years. 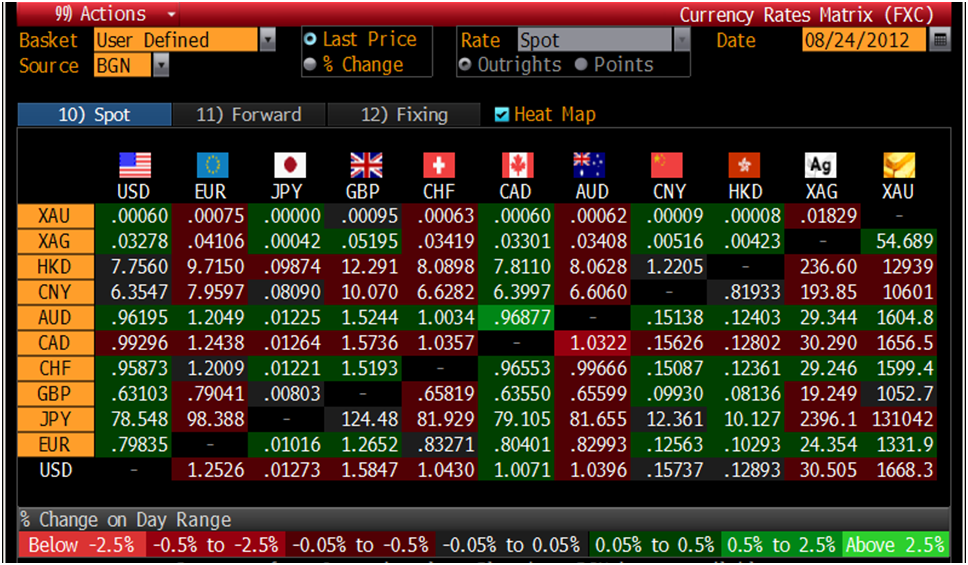 Conclusion
Therefore, we remain bullish in the long term and advise that investors and savers should have a healthy allocation of their wealth in gold in a portfolio to protect against the MSGM fundamental risks.

However, as ever markets are unpredictable and in the short term can do anything. This is particularly the case today with financial markets seeing significant volatility. Euro/dollar has been more volatile than gold in recent days.

We caution that gold could see another sharp selloff and again test the support at €1,200/oz and $1,550/oz.

If we get a sharp selloff in stock markets in the traditionally weak ‘Fall’ period, gold could also fall in the short term as speculators, hedge funds etc . liquidate positions en masse.

To conclude, always keep an eye on the MSGM and fade the day to day noise in the markets.

We remain bullish in the medium and long term and those who maintain an allocation to gold will be rewarded. However, we caution that there is the possibility of further weakness in the short term.

This seems unlikely due to the bullish technicals having aligned with the fundamentals however “event risk” is high and it would be foolish to completely discount the risk of yet one more sell off.

Which Country Goes Bankrupt Next? (Hint: It's Not Who You Think) – Daily Finance