Among the many factors responsible for the jump in WTI to just shy of $109 over the past hour, and Brent to new records in various currencies, is the following news reported so far only by Iranian PressTV: "An explosion has hit oil pipelines in the flashpoint Saudi Arabian city of Awamiyah in the kingdom’s oil-rich Eastern Province."

And some more from Arabian Digest: 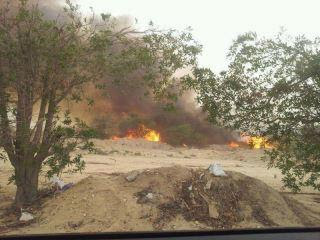 (photo of the pipeline under fire)

For the first time in decades, the Eastern Saudi Arabian volatile situation has reached the vital oil sector. A pipeline between Awamiya and Safwa has been reportedly targeted, and is under fire. Saudi Arabia's Shiite minority, mostly residing in the oil rich east, has been protesting for years against State sponsored discrimination. They are treated as second class citizens, denied public sector jobs, and vital development for their oil rich areas. Saudi Arabia's powerful Wahhabi religious establishment considers Shiites heretics, and constantly incites against them.

Security forces have killed two protesters in Awamiya, Eastern Saudi Arabia. They are launching a series of arrests and raids on houses, schools and mosques.
This is Awamiya this evening, protesters have blocked the Police road after arrests in the town. 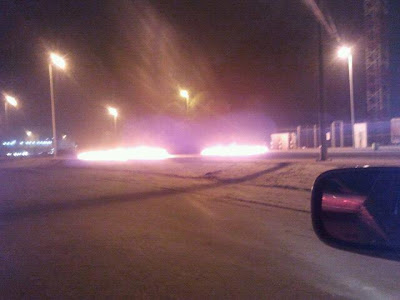 And now back to your regularly scheduled deflation.