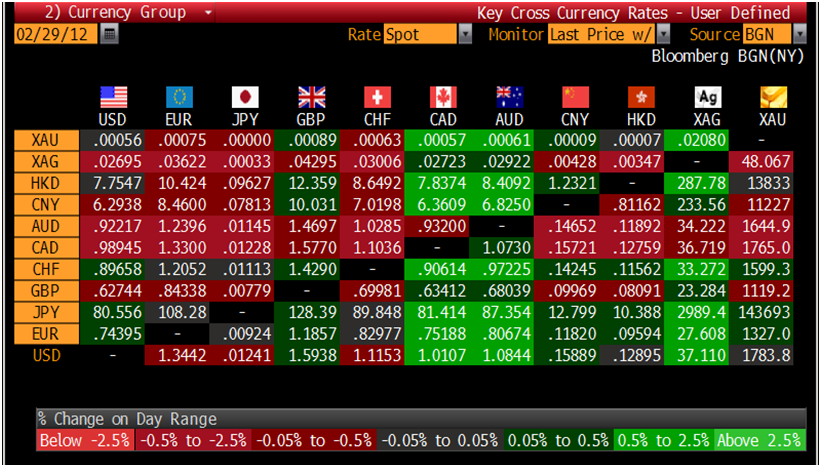 Over 800 European banks have taken €529.5 billion from the ECB today after taking €489 billion euros at the first tender in December. The ECB’s 3 year lending is now near 1 trillion euros ($1.35 trillion) and the ECB’s balance sheet looks increasingly precarious.

Although the flood of paper has been credited with fuelling a rally on Europe’s distraught bond markets and safeguarding the region’s banks, it is another exercise in kicking the beer keg down the road as it fails to address the fundamental issue which is the insolvency of many European banks and many European nations and the obvious risk of contagion from that.

Silver as ever outperformed gold yesterday and traders attributed the surge to “massive fund buying” and to “panic” short covering. Some of the bullion banks with large concentrated short positions covered short positions after the technical level of $35.50/oz was breached easily.

There then came a very sharp correction and a period of consolidation in recent months. Silver’s fundamentals remain as bullish as ever and the technicals look increasingly bullish with strong gains seen in January and February.

The gold-silver ratio dropped to its lowest level in 5 months, after silver rose more than 12% so far this month and an enormous 34% this year, outperforming other precious metals.

Spot platinum gained nearly 0.5% to $1,722.24, as investors await the latest in Impala Platinum's dealing with an illegal strike that has disrupted production at Rustenburg, the world's largest platinum mine.

Silver is both a precious and an industrial metal. Traders can buy it to hedge against a volatile stock market, as they do with gold. But it can also be used to make products like computer chips, meaning prices can rise when traders expect demand from manufacturers to go up.

In March contracts, silver rose $1.616 to $37.14 per ounce. It's up roughly 10 percent from where it was a year ago. Sterling Smith, senior market analyst at Country Hedging in St. Paul, Minn., said part of the reason silver is surging is that traders believe it's undervalued compared to gold. Gold closed at $1,788.40 an ounce, up $13.50 for the day. It's up about 26 percent compared to a year ago.

Energy contracts fell, partly because investors were pulling back after price gains last week. Oil prices remain close to nine-month highs because of concerns that Iran could cut shipments of crude to Europe and interfere with supplies elsewhere. The European Union and the U.S. are using sanctions against Iran because they fear the country is developing a nuclear weapon.

Smith said grains and other agricultural products have been enjoying a "winning streak" for the past week. Those movements are especially important now as farmers decide what to plant this year.

Soybean prices on Monday topped $13 a bushel for the first time in five months. That's because traders think there will be greater demand for U.S. exports of the protein-rich beans because smaller harvests from South America are expected.

The CHART OF THE DAY shows Brent prices reached $125.55 a barrel in London on Feb. 24, the highest since early May, and are up 15 percent this year. Bullion has gained 14 percent in the period and reached $1,787.55 an ounce last week, the highest since Nov. 14. The 30-week correlation coefficient between the commodities rose to 0.61 today, the most since June. A figure of 1 means the two always move in the same direction.

Gold’s “rolling correlation with oil is slowly inching higher and we think this signals that some catching up lies ahead,” Edel Tully, an analyst at UBS in London, wrote today in a report. “To the extent that rising oil prices feed into higher inflation expectations, gold is bound to reap benefits.”

Some investors buy gold to hedge against accelerating consumer prices and as a protection from slowing growth and geopolitical risk. The metal, which generally earns holders returns only through price gains, rallied for an 11th year in 2011 as central banks in Europe and the U.S. kept interest rates near record lows. Oil advanced this year on concern the west’s dispute with Iran over the Islamic republic’s nuclear program may lead to a disruption in exports from the Middle East.

Investors are holding a record 2,398.2 metric tons of gold in exchange-traded products backed by the metal, valued at about $137.1 billion, according to data compiled by Bloomberg. The tonnage exceeds the holdings of all but four central banks, which are expanding reserves for the first time in a generation.

The Islamic republic has threatened to close the Strait of Hormuz, a transit point for about 20 percent of globally traded crude oil, if its exports are banned in sanctions. While UBS forecasts Brent at $110 a barrel in the second quarter, “any Iran-related headlines, military threats or small incidents in the Persian Gulf are likely to push oil prices sharply higher and potentially boost gold in turn,” Tully said.

(Bloomberg) -- Oil Set for Best Month Since October on Recovery Signs, Iran
Oil rose, heading for its best month since October in New York, amid signs of economic recovery and concern that tension with Iran threatens global crude supplies.

West Texas Intermediate futures climbed as much as 0.6 percent after sliding yesterday the most in five weeks. Industrial output in Japan and South Korea beat estimates and U.S. consumer confidence rose to the highest level in a year. Oil has advanced 8.8 percent in February, its first monthly gain in three, as sanctions tighten against Iran, OPEC’s second- biggest producer.

The company, based in Johannesburg, is working to resume output at the world’s biggest platinum mine after bringing back 9,800 of 17,200 staff fired during the illegal strike, Impala said today in a statement. About 15,800 didn’t join the strike.

“It is dependent on operational turnout of staff,” Impala said. Fired workers have until tomorrow to return on their prior terms after the walkout, which has entered a sixth week.

(Reuters)
Gold edges up ahead of ECB loan offer‎

(Reuters)
Iran to accept payment in gold from trading partners