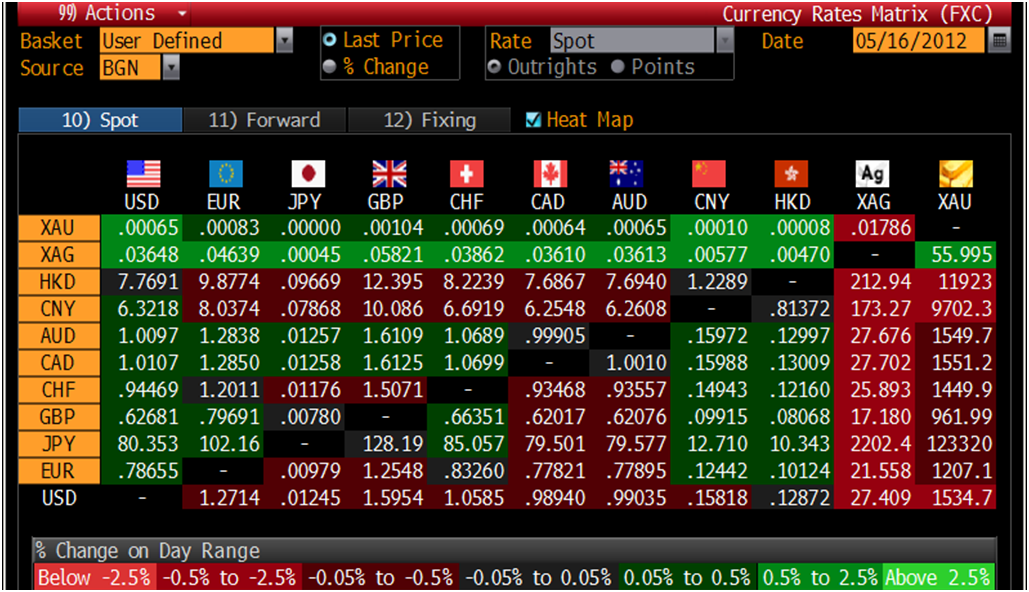 Gold continued its drop this morning touching its lowest price level since December.  The huge uncertainty regarding the Greek political and economic situation is leading to heightened risk aversion and a preference for the sidelines of the dollar (by traders and hedge funds).

Many have liquidated leveraged positions and opted for the relative safety of cash due to falls in equity and commodity markets.

However, the uncertainty will be positive for gold as it is already leading to a pickup in physical demand in both western and especially Asian markets which has been moribund in recent weeks.

Greek leaders are meeting today in efforts to form an interim government that will take the country into its 2nd election within a short month period. The Greek president warned of "fear that could develop into panics" at its banks. Greeks are already withdrawing euros from banks, apparently for fear of rapid devaluation should the country leave the euro zone, according to minutes from president Karolos Papoulias' negotiations with political leaders.

The eurozone instability is hurting the euro – so far the beneficiaries have been the dollar and bonds. However, gold will likely soon benefit as more speculative players and weak hands have been washed out of the market and physical demand is picking up.

In India the wedding season has just begun and after the recent strike, there is much expected pent up demand in India.

After the Lehman collapse in September 2008, gold fell by less than other assets, roughly 30% from peak to trough, and then recovered the losses soon after (see chart above).

Gold has again been correlated with risk assets recently as it was in the aftermath of the Lehman collapse and contagion crisis but this correlation will again be seen as short term.

Prices climbed 6.7% in the first quarter but since March 30, gold has tumbled 8.1% and is poised for the biggest quarterly loss since 2004 (see chart below).

This will be technically damaging but it is worth noting that gold recovered sharply from that quarterly loss in 2004 and the strong fundamentals of continuing institutional and central bank diversification into gold suggests the same may happen again in 2012 and into 2013.

Billionaire investor George Soros significantly increased his shares in the SPDR Gold Trust in the first quarter. Soros Fund Management nearly quadrupled its investment in the largest exchange-traded gold fund (GLD) to 319,550 shares - compared with 85,450 shares at the end of the fourth quarter.

John Paulson maintained his large stake, the ETF’s largest stake and other large and respected institutional buyers were PIMCO and the Teacher Retirement System of Texas.

Paulson, 56, who became a billionaire in 2007 by betting against the U.S. subprime mortgage market, told clients in February that gold is a good long term investment, serving as protection against currency debasement, rising inflation and a possible breakup of the euro.

Eric Mindich’s Eton Park Capital also bought  739,117 shares in the SPDR Gold Trust during the first quarter. The New York-based fund held no shares of the exchange-traded product as of December 31.

Global holdings in ETFs backed by bullion have seen slight declines in the last 3 months, the longest losing streak since 2004. Assets in the SPDR Gold Trust, the largest fund backed by bullion, reached at 1,309.92 metric tons on Aug. 8 and appear to be consolidating at these levels as were at 1,277.11 tons as of yesterday.

Paulson has to date been the biggest holder of SPDR shares, using them to hedge currency exposure, while other managers such as David Einhorn and Daniel Loeb have favoured more discrete, more cost effective and safer option of owning physical gold bullion.

(Bloomberg) -- Gold-Silver Ratio Climbs to Highest Level in More Than 4 Months
One ounce of gold bought as much as 56.0258 ounces of silver today, the most since January 9, according to Bloomberg data. The so-called ratio was at 55.9876 b 12:06 p.m. in Singapore.

(Bloomberg) -- India Sets Benchmark Import Price of Gold at $507 Per 10 Grams
India set the benchmark price for imports of gold at $507 per 10 grams, according to a statement from the finance ministry dated yesterday.

The benchmark price for imports of silver was set at $920 per kilogram.

The benchmark prices are used to set the tax on precious metal imports.

(Bloomberg) -- India Has No Plans to Further Raise Import Duty on Gold
India, the world’s biggest importer of gold, has no plans to further increase the import duty on bullion, junior commerce minister Jyotiraditya Scindia said in reply to query in parliament today.

The government raised the duty to 4 percent from 2 percent effective from March 17, Scindia said.

(Reuters Global Gold Forum) – Indian Gold Demand - “Decent Volumes”
On the physical markets today, the drop in the rupee to record lows against the dollar has not deterred buying in India, where local dealers say the drop in the domestic price of gold to six-week lows has unleashed demand in "decent volumes", although the weakness of the currency is an issue, they say.

What Will Happen to Greece and Gold? - GoldSeek