Gold fell $3.70 or 0.23% in New York yesterday and closed at $1,638.70/oz. Gold started out sideways in Asia then gradually dropped lower and this weakness continued in early European trading. 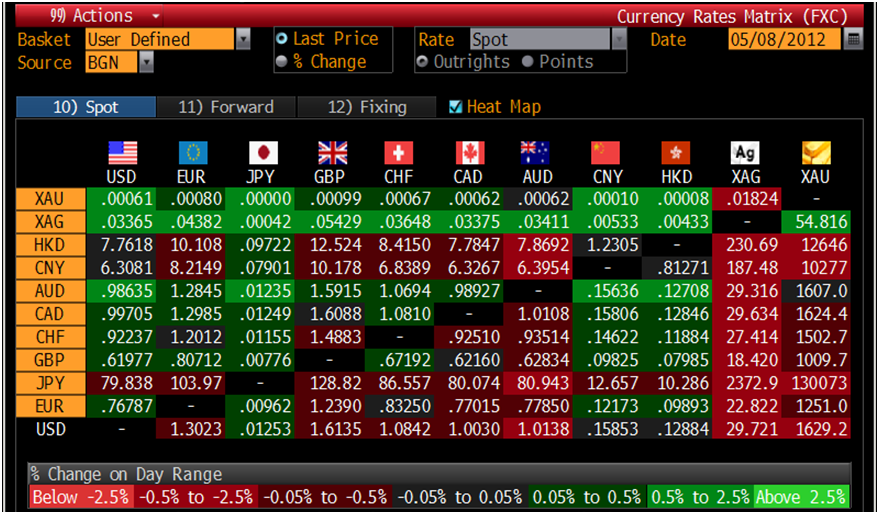 Gold edged lower on Tuesday despite the weaker euro and stock markets after furious citizens in Greece and France voted against austerity measures.  Gold prices are being supported by bargain hunters who continue to buy dips around the lower end of the metal's recent range between $1,620/oz and $1,680/oz.

The elections in France and Greece create added political uncertainty to an already extremely uncertain financial and political situation and this is likely to weigh on the euro.

Gold has been trading between $1,620 and $1,680 for about a month. It is supported by the very uncertain macroeconomic and monetary environment but recent price weakness has made some buyers – especially more speculative buyers in western markets hesitant.

Gold’s support is coming from store of wealth buyers including central banks and the increasingly important Middle East and Far East Asian and Chinese buyers.

Mainland China’s gold imports from Hong Kong surged a huge six fold in the first quarter when prices were between $1,550/oz and $1,800/oz and this demand is supportive of prices at these levels.

China is set to displace India as the world’s largest consumer of gold in the coming months.

Imports from Hong Kong were 135,529 kilograms (135.53 metric tons) between January and March, from 19,729 kilograms in the year-earlier period. Hong Kong's gold exports to China in March increased about 59% on the month to the 3rd highest level on record, and the gold flow from China surged to its highest in the last 2 years.

The lack of enthusiasm for bullion amongst western buyers in recent weeks may be beginning to change as there has been an increase in demand in recent days due to growing concerns about Spain and the risk of contagion in the Eurozone.

Deepening political uncertainty in the eurozone is also leading to a slight uptick in demand.

Gold imports by India could rise again on a backlog of demand from jewellers after the federal government decided to scrap an excise duty on jewellery it imposed in March 2012.

Iranians and Arab Spring countries are buying “massive quantities of gold” in order to protect their wealth from political instability and depreciating currencies.

Iran boosted imports of gold, jewelry and precious metals from Turkey by 3,692% from $13 million in March a year ago to $480 million in March 2012, according to the statistics agency in Ankara April 30 - as reported by Bloomberg.

The gold market was the biggest contributor to a $4.3 billion improvement in Turkey’s trade balance this year. That has aided Turkey and sent Turkish yields on benchmark two year notes 155 basis points lower this year. This is the biggest drop among major developing nations. 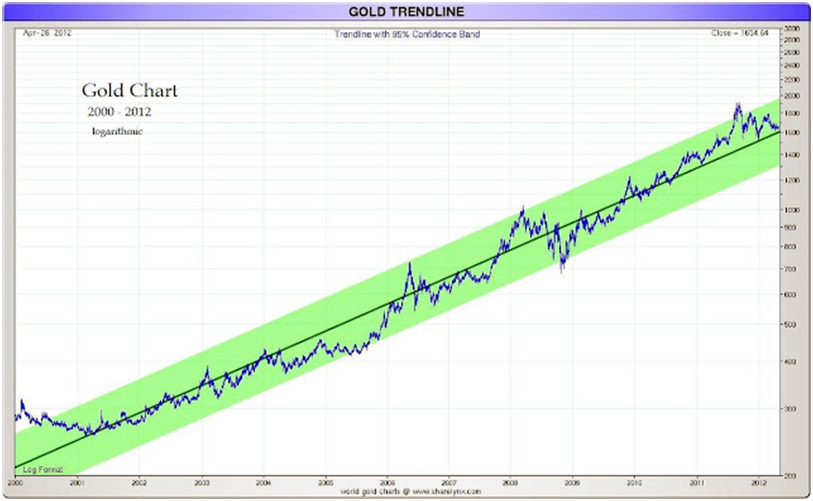 While Turkey has assured the U.S. government it will cut purchases of oil from Iran by 20% this year, its total trade with the Islamic Republic increased 47% to $4.8 billion in the first quarter from a year earlier.

Sanctions aimed at isolating Iran because of its nuclear program, combined with revolutions in the Middle East, have spurred a tripling in the region’s purchases of Turkish precious metals and jewels to $942 million in the first three months, from $282 million in the same period last year.

This 30% increase in demand is contributing to gold remaining above $1,600/oz in what has all the hallmarks of another period of consolidation prior to higher prices.

“Turkey is exporting massive quantities of gold to Iran and Arab Spring countries as citizens in those countries switch to portable wealth,” Mert Yildiz, chief economist for Turkey at Renaissance Capital, told Bloomberg on April 30.

The increase in trade with Iran comes as sanctions make it harder for trading partners such as Turkey, India and China to pay in dollars and euros.

Iran said in February it would accept payment in any local currency or gold.

Reuters report today that Iran is accepting payments in yuan for some of the crude oil it supplies to China, the Iranian ambassador to the United Arab Emirates said on Tuesday. "Yes, that is correct," Mohammed Reza Fayyaz told Reuters when asked to comment on an earlier report in The Financial Times.

The newspaper cited unidentified industry executives in Beijing as saying most of the oil that goes from Iran to China is handled by the Unipec trading arm of Sinopec China's second-largest oil company, and through another trading company called Zhuhai Zhenrong.

Fayyaz also confirmed that Iran was spending the currency on goods and services imported from China.

Currency wars recently escalated when Iran’s central bank and more than 20 other Iranian banks were expelled from the Society for Worldwide Interbank Financial Telecommunication, known as Swift, in March.

It is now almost impossible for Iran to complete large international fund transfers and this was regarded as a form of economic warfare.

Representatives from the U.S., Russia, China, the U.K., France and Germany last month held their first international meeting with Iran on its nuclear program in 15 months. They agreed to resume the negotiations in Baghdad on May 23, following “constructive” talks in Istanbul, Catherine Ashton, the EU’s foreign policy chief, said April 14.

While Turkey has agreed to cut oil imports from Iran, its officials have said they aren’t bound to abide by broader sanctions imposed by the U.S. and European Union, which are stricter than those from the United Nations.

The economic cost of sanctions is “borne by Turkey,” not just by Iran, Economy Minister Zafer Caglayan recently said.

A spokeswoman for the U.S. Embassy in Ankara who declined to be identified, said discussions with Turkey were continuing.

Turkey imports almost all of its energy, and every $10 a barrel increase in the price of oil adds about $4 billion to Turkey’s import bill.

Iran supplies about 40% of Turkey’s oil, making it the largest single source for the fuel, according to the Energy Ministry. The country pays about $6 a barrel less for Iranian oil than Brent crude, according to a Goldman Sachs Group Inc. report in March.

The narrowing in Turkey’s current-account gap has helped buoy the lira, with the currency appreciating 7.3% against the dollar this year following an 18 percent slump in 2011, the biggest drop worldwide.

Turkey has been a net exporter of more than $1 billion of gold, jewelry and precious metals so far this year after importing a net $411 million in the same period last year, according to official statistics. Turks give gold as gifts for events from births to weddings, and have traditionally used the metal as a store of value against yearly inflation that was more than 70% as recently as a decade ago.

Turks are believed to have a massive 5,000 tons of gold “stashed under their pillows.” So estimated Ozcan Halac, head of the Istanbul Gold Exchange,  in March. That’s about $265 billion, or a third of Turkey’s gross domestic product, based on a gold price today of $1,640.29 an ounce.

In March, The Wall Street Journal reported how this Turkish government, facing a bloated current account deficit is to attempt to persuade Turks to transfer their vast personal holdings of gold into the country's banking system.

OTHER NEWS
(Bloomberg) -- U.S. Mint Gold Coin Sales Rise in May, Surpass April Total
The U.S. Mint’s sales of American Eagle gold coins rose 12 percent to 22,500 ounces so far in May, compared with 20,000 for all of April, according to data on the Mint’s website.

Jewelers closed stores for three weeks in March in the longest-ever strike, after Mukherjee doubled import levies on gold and imposed a 1 percent excise duty on non-branded ornaments. The stoppage ended on April 6 after the government assured jewelers that their concerns would be considered. The strike cost the industry about 200 billion rupees ($3.9 billion) in lost revenue, according to the All India Gems & Jewellery Trade Federation.

The tax removal may boost demand in India, increasing imports and bolstering global gold prices after they climbed 4.9 percent this year. Bullion is advancing for a 12th year as Europe’s debt crisis and concern that global growth is slowing has fuelled demand for wealth protection.

“The Finance Minister has understood our problems and removed the tax on both branded and unbranded jewelry,” said Bachhraj Bamalwa, chairman of the All India Gems & Jewellery Trade Federation.  “Demand should recover from now and imports will improve as jewelers who had not stocked up earlier will start buying.”

Gold imports plunged to 30 metric tons to 35 tons in April from 90 tons a year earlier after higher taxes cut demand, Prithviraj Kothari, president of the Bombay Bullion Association, said May 2. Imports in 2012 are expected to be 700 tons to 750 tons, he said. That compares with a record 969 tons last year, according to the World Gold Council. 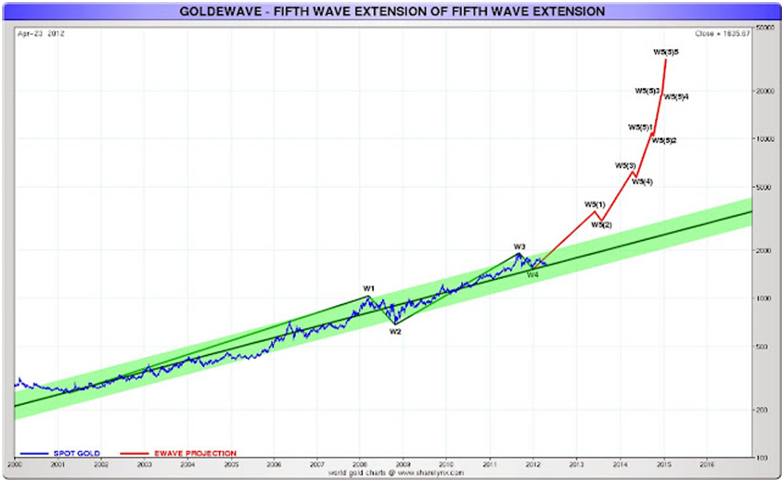 (Bloomberg) -- Gold May ‘Push Higher’ as Global Economies Slow, Fcstone Says
Gold could “push higher” over the course of this month as global economies slow, increasing expectations that central banks will take steps to boost growth, according to INTL FCStone Inc.

“We view gold, alongside the dollar, as something of a safe haven, especially if the European debt crisis starts to flare again amid renewed doubts over future policy in light of the recent elections,” analyst Edward Meir wrote in a note dated yesterday.

Gold: A Whole Lot Of Uncivilized People Out There... – Zero Hedge