Like Christmas and Columbus Day, the left refuse to let a holiday go by without whining and this year once again the war on Halloween continues.

Likely at the insistence of some new school administrator fresh out of a graduate program in women’s studies or whatever, The Daily Bell's Ben Bartbee reports that “Lower Merion School District cancels Halloween parades over safety, inclusivity concerns,” sacrificing a 50-year tradition at the altar of Social Justice.

Halloween stuff in Lower Merion School District is now replaced with some vague, sterilized abomination called “fall-themed activities,” which are sure to suck the souls out of the schoolchildren.

But it gets better, as Bartbee notes, this year, Buzzfeed has issued a fatwa against Jeffrey Dahmer costumes in its public service denouncement: “Planning On Dressing Up As Jeffrey Dahmer For Halloween This Year? Don’t“:

“eBay has banned the sale of costumes inspired by the serial killer Jeffrey Dahmer in the run-up to Halloween for violating its policy.. Dahmer killed 17 people, predominantly Black men and boys… The company policy states that sellers are banned from listing items that ‘promote or glorify violence’ or are associated with violent individuals, the acts for which they gained notoriety, or crime scenes from the past 100 years.”

At a minimum, half of all Halloween costumes could be construed as “glorifying violence.” That’s how Halloween works – it’s about exorcising terror, and depravity, and everything unholy (in the Christian adaption, before All Saints Day).

In all reality, Jeffrey Dahmer costumes would’ve garnered much less scrutiny if not for two crucial features of his victims: homosexuality and racial diversity. Via Out Magazine:

“Dressing as this real-life killer who tortured and murdered 17 men and boys (many of whom are Black and gay) is… actually a pretty awful idea.”

The whataboutism does get tiresome. But as a matter for the record, we all know that a costume of a serial killer who killed and ate white people would enjoy fairer treatment among the activist community.

But, finally, and perhaps most terrifying for the average American parent, thanks to Washington's excesses, Halloween is more expensive this year than ever before - thanks to inflation.

Data from the National Retail Federation has found that some $10.6 million will be spent on Halloween in the United States this year, whether that’s in the form of nightmarish costumes, spooky decorations for the house, or candy for trick-or-treaters. Compared to 2021, this is an increase of about half a million U.S. dollars, showing how consumer spending patterns are steadily back on track after a comparatively quiet Halloween in the pandemic year of 2020.

Yet as Statista's chart shows, while expenditure was up in 2021, when taking inflation into account, it is actually expected to be down in 2022. Where Halloween spending hit 7.9 million U.S. dollars in 2021, once adjusted for inflation, it will likely hit closer to 7.7 million in 2022. 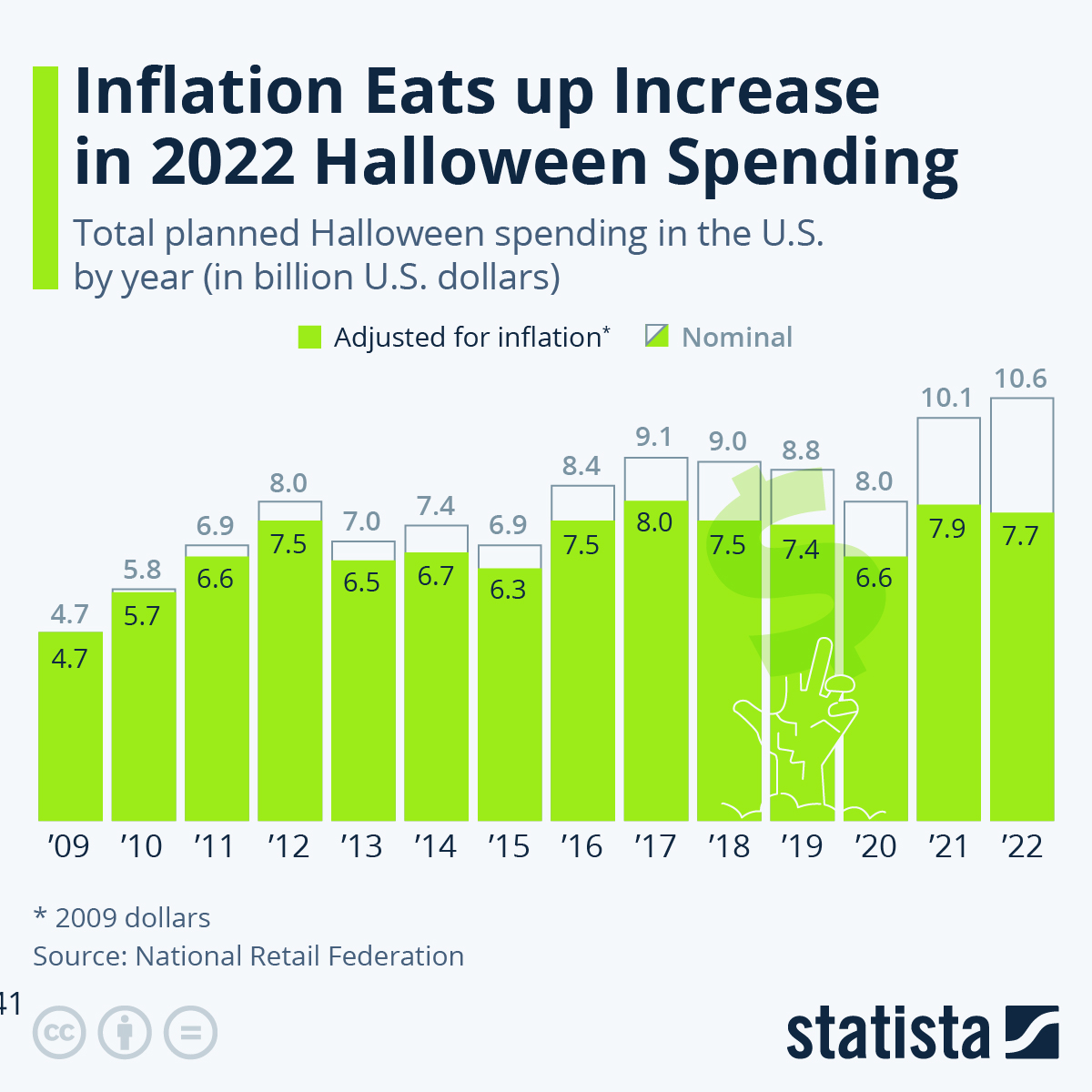 Sure, we’re seeing higher prices everywhere we go, but when you look at the different elements of Halloween, the picture is frightening.

Let’s start with the biggest staple of the Halloween experience: candy.

As PJMedia's Chris Queen reports, the price of candy has gone through the roof, and not just for Halloween. According to the Bureau of Labor Statistics (BLS), the price of candy is up 13.1% over last year as of September. That’s the biggest jump since the Great Recession of 2008 and the highest candy inflation has ever been this century.

Candy prices have been on a steady rise over the past several months. Add to rising prices the fact that many candy manufacturers are packaging candy in smaller quantities, which means you’re getting even less bang for your buck.

It’s almost enough to turn more of us into those boring people who give apples to trick-or-treaters.

While we’re at the grocery store, let’s talk pumpkins. You guessed it; pumpkin prices have gone up too. According to the U.S. Department of Agriculture’s Economic Research Service, “At $5.07 per jack-o’-lantern type pumpkin (Howden) in the third week of October 2022, retail pumpkin prices are up 2 percent from the same time last year.” Demand for specialty pumpkins in unusual colors has gone up, no doubt raising those prices as well.

How about those decorations that light up or inflate — you know, the ones that consume electricity? They cost more to run since electricity prices are up an average of 15.9% over last year nationwide, according to the BLS. (Don’t forget: that’ll affect Christmas lights, projections, and inflatables too.)

And what about driving the kids around for trick-or-treating? That’s going to cost you more too. Data from the U.S. Energy Information Administration tells us that, as of last week, gas prices are up 38.6 cents per gallon over this time last year, and diesel is worse at $1.62 per gallon higher than last year. Even though gas prices are going down a bit, the increase over last year is nothing to dismiss lightly. No wonder witches ride brooms.

And let’s not forget costumes. Newsweek points out, using data from the BLS Consumer Price Index for All Urban Consumers (CPI-U), that, while it’s hard to track the increase in the price of costumes, we can make some determinations about how those have gone up.

“While the BLS stats do not focus specifically on Halloween costumes, the overall category of ‘apparel’ is up 5.5 percent in September year-on-year,” write Chloe Mayer and Rob Minto at Newsweek.

“And even those making their own costumes might notice that prices are up, because the category ‘sewing machines, fabric, and supplies’ was up 11 percent in September compared to last year.”

Add to those stats the intangible that costumes seem to get more elaborate every year, and it’s easy to see how inflation is even affecting what your kids wear when they go trick-or-treating.

With nearly everything we buy costing more this year, Halloween is more of a trick than a treat. But we can’t cower in fear; instead, we need to make sure that, just eight days after Halloween, we scare the bejesus out of the Democrats by voting them out of power. It’s the first giant step toward ending this horror story that is the Biden administration’s assault on our wallets.