Boris Johnson's week is getting worse... much worse.

Following the high profile resignations of Chancellor of the Exchequer Rishi Sunak and Health Secretary Sajid Javid, five more junior ministers resigned at once early on Wednesday afternoon, in what appeared to be a coordinated attempt to inflict maximum pressure on Johnson.

Their letter of resignation said it had “become increasingly clear that the government cannot function given the issues that have come to light and the way in which they have been handled."

As Bloomberg reports, the prime minister has now lost more than 35 people from his government...

Gary Sambrook, a Tory MP on the executive of the 1922 Committee - which organizes confidence votes in the party leader - told Johnson in the House of Commons on Wednesday that he must “take responsibility and resign.”

Meanwhile rank-and-file Conservatives are reportedly preparing to meet to discuss a rule change that would allow another leadership challenge to Johnson, after the prime minister narrowly survived a confidence vote last month.

One Tory official said that the ministers “believe the situation is now untenable and they intend to tell the PM he must now resign”.

And worse still, there is a more than 70% chance that he will be gone by the end of August...

MorningPorridge's Bill Blain offered his thoughts this morning - the outlook for the UK looks grim. Recession is a high probability. A cost-of-living crisis is upon us. Inflation is rampant and into double figures soon. The Bank of England has run out of policy tools and ideas. Workers are increasingly militant in their demands for pay rises. The national debt is 96% of GDP. The nations piggy bank feels empty, but Boris wants to spend his way back into popularity, even as the NHS, Defence and Education are all floundering.

Yada, yada, yada… that the UK looks grim has pretty much been the story of the last 7 years, so let’s not over-react. The sun will still come up tomorrow… Will it come up on Boris? Regrettably.. yes.

Yet, the tortuous politics of dispensing with Boris do matter. Any nation depends on the credibility of its political process to support the stability of its currency and bond markets – they key elements of a modern political economy, or the Virtuous Sovereign Trinity, as I call it. Last night it was almost a buy-the-fact moment when Chancellor Rishi Sunak and Health Minister Sajid Javid resigned. The markets reacted like it was good news – finally the end of the flailing Boris presidency. (Deliberate use of presidency – Boris’ only goal is the preservation of Boris.)

The TV yesterday was fascinating. I watched the lunchtime news and the shots of the Cabinet meeting. Everyone looked miserable. Sunak was not making eye contact. Javid had his head down. Something is up I thought. Sure enough. When the two big dogs said sod it, Johnston spent the rest of the evening making desperate promises to keep others in line – and its unclear exactly what they demanded and got from him.

In his hayday Boris was a popular politician as a rabble rouser, populist and charmer. He got Brexit done, and sure enough it’s the people that were. But, the details of government always seemed to elude him. Scandal and embarrassment from the Get-go. Never has a government so squandered a solid 80 seat parliamentary majority – and while that is embarrassing for us all, its also bad news for the UK.

A period of chaotic deconstruction may now be good for us. The complete shocking collapse of the Boris regime could open the political environment to a reset – where new government comes in, the old guard are swept away, allowing the nation can take stock and reinvent itself – and rebuild our relationship with Europe in particular. Out, but close. Etonians should be banned from politics for at least a generation.

If he quits within a month, BoJo's term would be the  4th shortest tenure of any British Prime Minister... 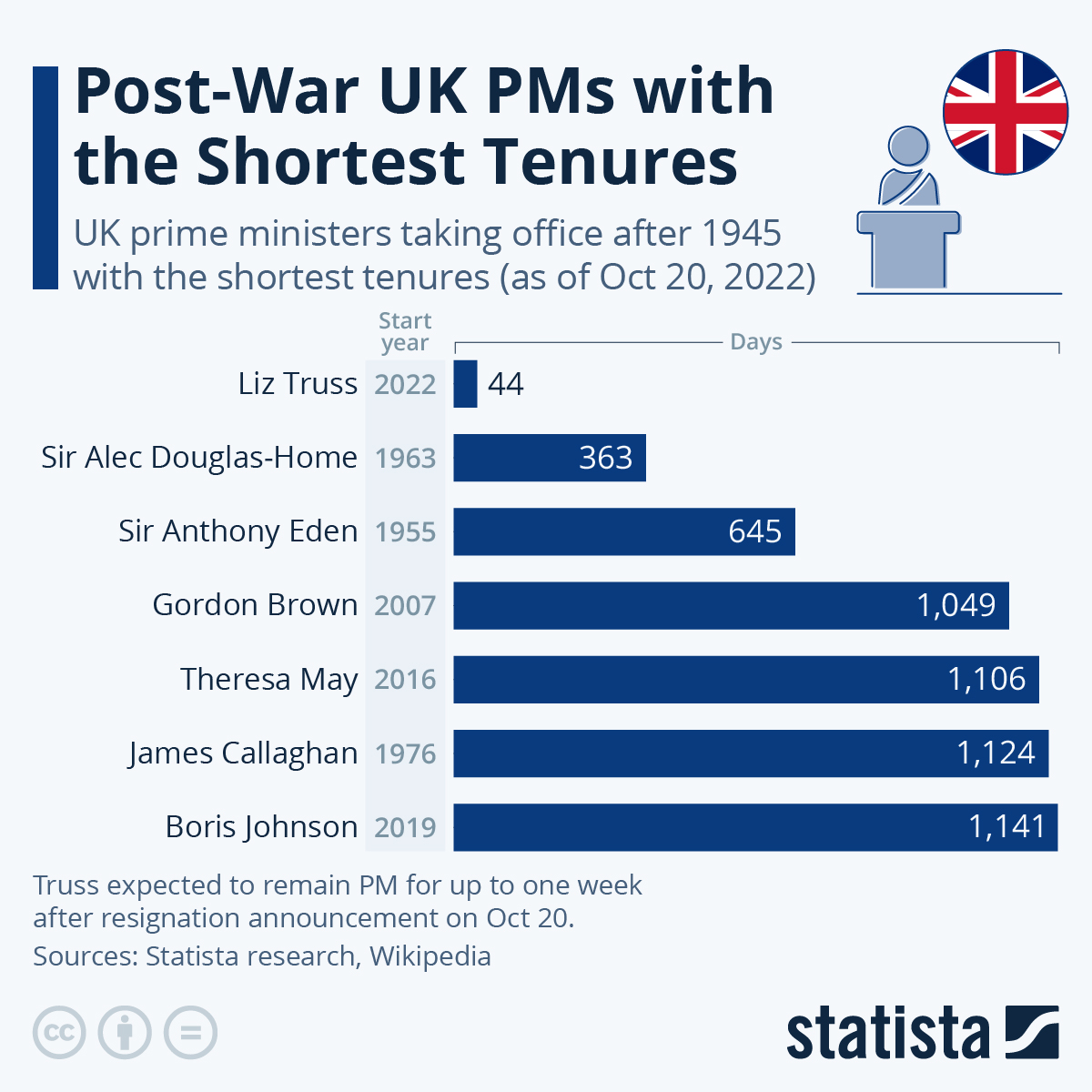 "I am not going to step down and the last thing this country needs, frankly, is an election," he told a parliamentary committee, when asked to confirm he would not seek to call an election rather than resign if he lost a vote of confidence.

We shall see Mr.Johnson.