The state of America's policing has come under scrutiny after George Floyd's shocking death in Minneapolis. That resulted in massive protests all over the country with people demanding reform and an end to police brutality and racism. It has created a debate about "defunding" the police and redirecting more money into community outreach programs.

New York City Mayor Bill de Blasio recently said he would make cuts to the NYPD's $6 billion budget and set funding aside for communities and his view is at odds with President Trump. On Monday, Trump said that "there won’t be defunding, there won’t be dismantling of our police, and there is not going to be any disbanding of our police.”

As Statista's Niall McCarthy notes, over the past 30 years, the U.S. has dramatically increased police spending while funding has fallen for mental health services, community outreach programs, housing subsidies and food benefits programs for disadvantaged low-income communities that have to deal with high levels of criminality. Data from The Center for Popular Democracy, Law for Black Lives and the Black Youth Project 100 estimates that the U.S. spends a collective $100 billion on policing per year and another $80 billion on incarceration. It also shows the amount spent on policing per person in a selection of major cities which ranges from $381 to $772.

Well before George Floyd lost his life, an earlier version of the report revealed serious issues about policing in Minneapolis, stating that "racial disparities there are especially stark" and that "black and indigenous people were more than eight and-a-half times more likely than whites to be arrested for low-level offenses". It also said that "black people comprise 19 percent of the Minneapolis population but account for 59 percent of low-level arrests. Whites, by contrast, comprise 64 percent of the population but only 23 percent of low-level arrests". In 2017, Minneapolis spent $408 per person on its police force. Unfortunately, that figure was not available for 2020, unlike the other cities listed on this infographic. 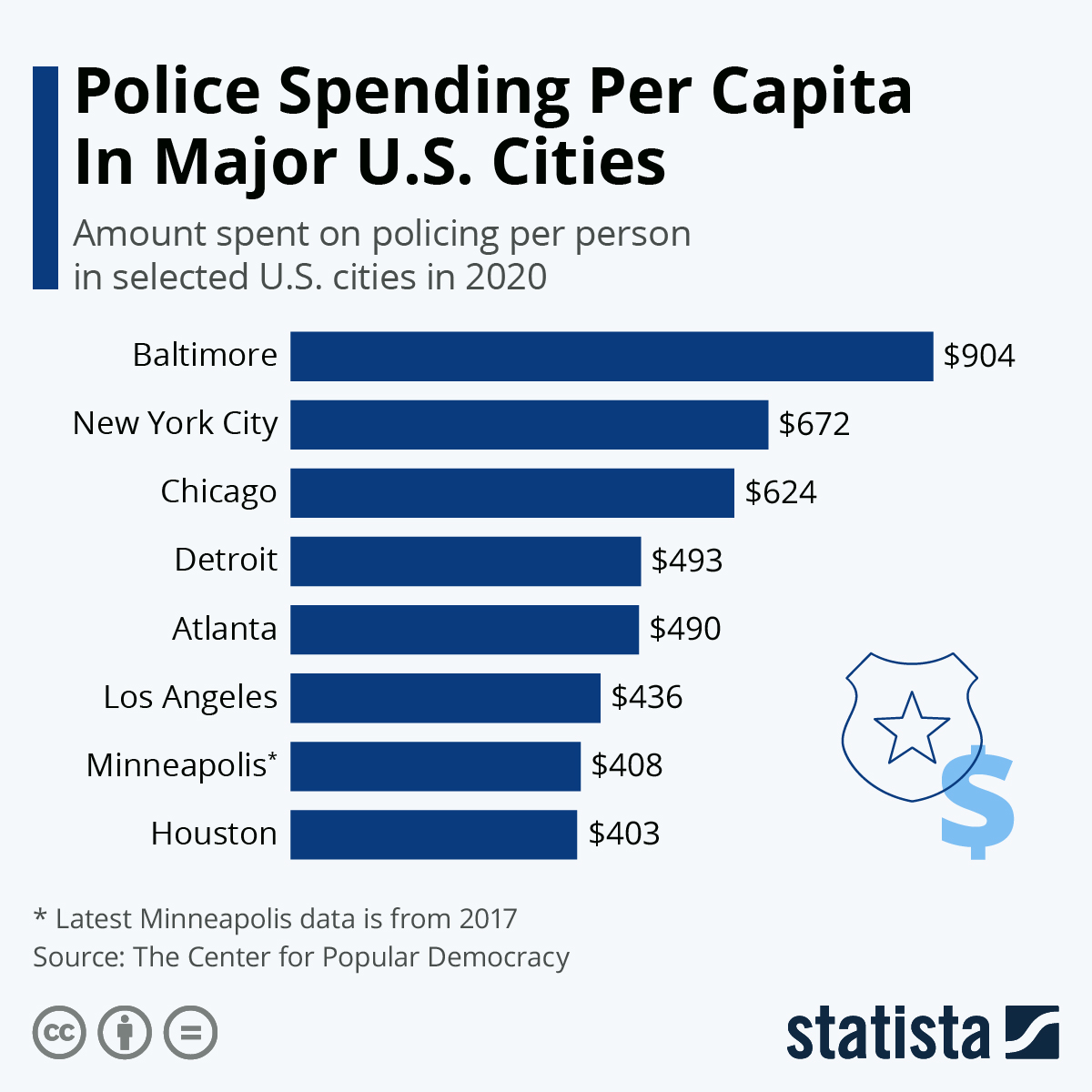 After Freddie Gray was killed by police officers in 2015, Baltimore also received national attention for its heavy-handed policing and levels of racial division. Back in 2017, the report noted that its police department was under scrutiny due to years of corruption, misconduct and brutality that eroded trust with communities of color. Out of the city's operating budget more than a quarter of funding is allocated to policing, some $536 million. Spending on policing per person is the highest of any major city in U.S. at $904. By comparison the figure in New York was $672 while it was $436 in Los Angeles.

The report notes that police funding levels increased in all cities analyzed in the 2017 report (though 2020 data was not available for Minneapolis) and the figures for new cities included in the analysis show that some reform has occurred. Milwaukee is noted as an example where grassroots groups successfully demanded police divestment, which has happened, and the police department's budget is now lower than in previous years. 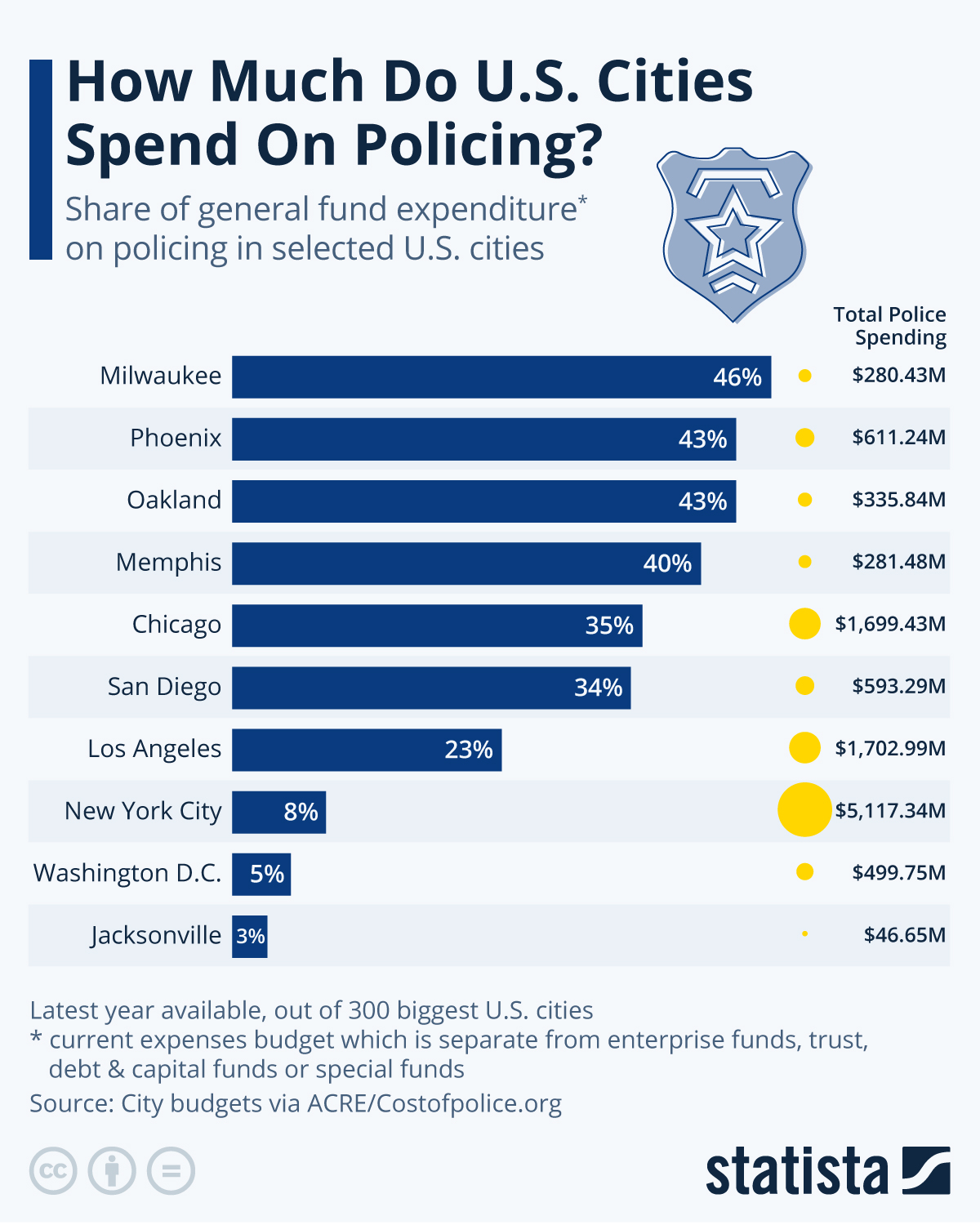 The same old trends are evident as in previous years in most major cities, however with the NYPD's $5.6 billion budget accounting for 7.7 percent of New York City's general fund. A general fund is used by a city to support municipal services like law enforcement, the fire department and parks, as well as planning, community development and administrative support services.